What would have to be done to make DAB radio successful?

“What there does need to be, as Freeview and digital satellite has shown in television, is simply a sufficient combination of services, technology, simplicity and price or discount to provide a value proposition for the consumer,” suggested Stephen Carter in 2004, when he was chief executive of Ofcom.

“….. for the consumer” were the key words. They were also the words that became forgotten. The consumer was ignored in the radio industry’s pursuit of the radio industry’s own agenda for DAB radio. As a consequence, DAB radio has still not succeeded … with consumers. The failings were acknowledged by Quentin Howard, one of the architects of DAB radio in the UK:

“The mistake by broadcasters was in not understanding that ‘build it and they will come’ is no longer practical in this integrated technological age.” 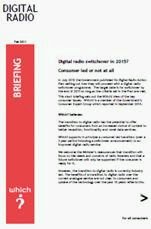 Which?, the UK consumer advocacy, noted the radio industry’s lack of attention to the consumer in a February 2011 briefing paper entitled ‘Digital Radio Switchover in 2015? Consumer Led Or Not At All’:

Which? suggested that, before the government can announce a date for digital radio switchover, the following criteria should be met:

• “Uptake should be a minimum of 70% of all FM radio listening transferred to digital, leaving 30% still listening on analogue (FM/LW/MW/SW) (the Government’s Digital Radio Action Plan suggests 50%)
• The transition to digital must not be announced until coverage, including a measure of signal quality, is better than that of FM radio
• DAB must have been fitted as standard in all new cars for at least two years and an effective and affordable solution to in-car conversion must be available prior to the announcement of a switchover (which costs no more than for in-home conversion)
• Government must conduct a full cost-benefit analysis from a consumer perspective as a priority because increasing consumer desire for DAB should not focus on cost alone
• Minimum standards associated with a kite mark must be ambitious and future-proofed and any incentive scheme to switch to DAB should offer only kite marked receivers
• Consumer group representatives must be involved in the development of an information campaign independent from industry to raise awareness of the digital switchover by consumers and ensure guidance and training tools are available to retailers. In this regard, any lessons from the Digital TV switchover should be acted upon
• In its assessment of the environmental impact of a switchover to digital radio, the Government must tackle the full range of issues around recycling of analogue sets and the energy impacts of DAB”

However, in some of these areas of concern, current policy on DAB radio appears to be moving in the opposite direction to that advocated by Which?:

• The 50% criterion (50% of radio listening via digital platforms before switchover can be announced) is not mandatory because it was never included in the Digital Economy Act [see my Jan 2010 blog]
• The latest plan for DAB is not to deliver reception even as good as FM, but to make it worse than FM [see my recent blog]
• Only 1% of cars have DAB radios fitted and future take-up will inevitably be slow [see my recent blog]
• Roberts Radio reported a 35-40% customer return rate for its in-car DAB radio adaptors [see my Nov 2010 blog]
• The cost benefit analysis of DAB radio to be considered by the government will also be authored by the government, rather than commissioned independently [see my Jan 2011 blog]
• Roberts Radio admitted having had to pull the plug on several DAB receiver projects, including the industry’s promised ‘£25 DAB radio’, because they could not meet Roberts’ minimum quality standards

In July 2010, after the formation of the new coalition government, culture minister Ed Vaizey had said:

“If, and it is a big if, the consumer is ready, we will support a 2015 switchover date. But, as I have already said, it is the consumer, through their listening habits and purchasing decisions, who will ultimately determine the case for switchover.” [see my Sep 2010 blog]

So, it might appear that the Minister and Which? are, in fact, both lined up in agreement that digital radio switchover can only happen if it is supported by consumers. So why has the government not yet recognised that consumers already seem to have given the thumbs down to DAB?

Because there are middle men (Ofcom, DCMS, Digital Radio UK, Arqiva, DAB multiplex licence owners) who persist in keeping the DAB dream alive in Whitehall. Yet again, consumers are being drowned out by the clamour of agencies eager to pursue their own narrow objectives. And the mantra of the middle men is: ‘DAB crisis, what crisis’?

2 thoughts on “Which? says: DAB radio switchover must be “consumer led or not at all””