It is good to know that radio is still an extremely popular medium in the UK, something borne out by the latest radio audience metrics published by industry body RAJAR for Q1 2011. However, in its determination to make every quarter’s results newsworthy, RAJAR has a track record of bending the truth to achieve press headlines [see my blog May 2010]. This latest quarter was no exception.

During sixteen quarters between 2001 and 2006, total hours listened to radio were greater than they were last quarter. “New record?” No. “Broke all records”? Er, no. 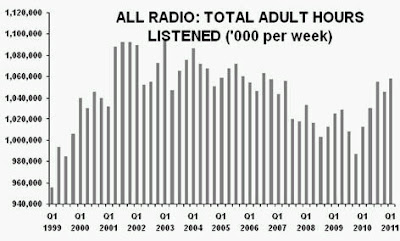 The reality is that total radio listening has not yet returned to the level it had achieved in 2001. Except that, ten years ago, the UK adult population was 48.1 million, whereas now it is 51.6 million. So the population has increased by 7% over the last decade. Yet total UK radio listening is still less than it was then.

Most statisticians I know would refer to that as a like-for-like 7%+ decline in total hours listened to radio. However, to RAJAR, it is evidently a “new record” that “broke all previous records.” 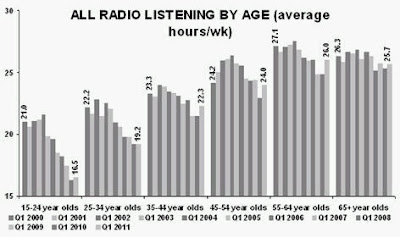 Why does any of this matter? Because radio broadcasters have been progressively losing usage over most of the last decade. Initially, it was 15 to 24 year olds that were spending less time with radio. Increasingly, it is also 25 to 34 year olds. For a decade, the UK radio industry has desperately needed a coherent strategy to reverse this loss of listening. The decline in young adult listening to broadcast radio does not merely impact the NOW. If these consumers do not find anything in their youth worth listening to on the radio, they will grow old without the radio habit. Their radio listening patterns NOW are likely to influence radio listening for the next half-century.

This is why RAJAR’s continuing efforts to achieve yet another headline in the Daily Mail proclaiming “Radio listening at an all time high” are ultimately redundant. Those headlines do not impact the reality of the data collected from tens of thousands of radio listeners every month. Those data show incontrovertibly that listening is in significant long-term decline amongst younger demographics. And radio will be in mortal danger if it does not re-invent itself for the next generation.

You only have to listen to any pirate radio station in London to understand that the gulf between what young people are actually listening to and what the old fogies who run UK radio are giving them has never been wider. Chris Moyles is as passé as Dave Lee Travis was twenty years ago.

So, yes, RAJAR’s fibs and the resulting Daily Mail headline will be another opportunity for champagne corks to pop in radio boardrooms across the land. But if radio doesn’t start making itself exciting and relevant to young people, broadcast radio’s future role will be relegated to a soundtrack in old people’s homes. Complacency such as that propagated by RAJAR will only make many radio businesses redundant in the long run.

^ in a footnote this small, the RAJAR press release admits the caveat “since new methodology was introduced in Q2, 2007.”

3 thoughts on “When UK radio listening figures are this good, why does RAJAR need to fib?”