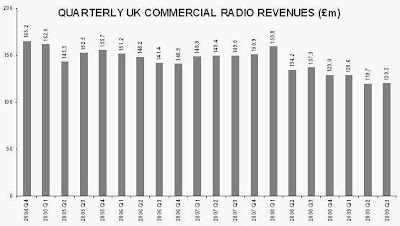 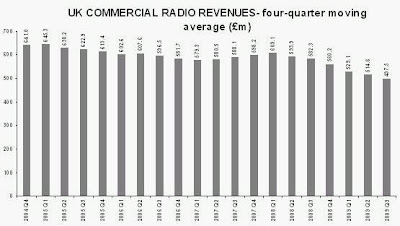 Have we hit the bottom yet? That is the thorny question. The answer is not easy. Yes, this most recent quarter’s revenues have halted their recent terrifying decline, demonstrating a tiny 0.4% improvement over the previous quarter. But one ‘okay’ quarter does not necessarily signal a turnaround. You would be risking your shirt to announce that the radio advertising market is going to improve from now on. 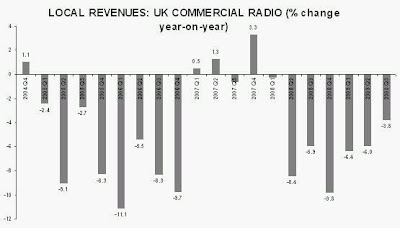 The one bright spot was local advertising, which accounts for 30% of total radio revenues. It improved quarter-on-quarter by 2.6%, although it was still down 3.8% year-on-year. Nevertheless, it is local advertising which has held up better during this recession, exhibiting only single digit percentage declines year-on-year. If you are looking for ‘grass shoots’, you might find them here. 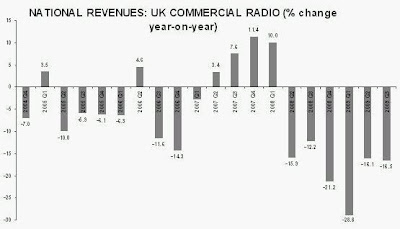 By contrast, national advertising (50% of total radio revenues) continues to be an unmitigated disaster. This was the sixth quarter in succession to record double-digit percentage declines year-on-year. National radio advertising in Q3 2009 was at its lowest point for eleven years (longer, if you factor in inflation). Neither is this a purely cyclical phenomenon – out of the last 20 quarters, only six have exhibited year-on-year growth. In aggregate, during three and a half out of the last five years, radio has suffered declining national revenues.

Where does that leave the UK commercial radio industry? Well, for the small local stations that have continued to fulfil the remit of their original licences by serving local listeners and local businesses, if they have survived this far, they might yet live to see another day. It is impossible to predict that ‘the worst is over’, but it might be that ‘the worst of the worst is over’. Local advertising is never going to migrate wholesale to digital TV or to the internet, and the yields that a successful local radio station can extract remain high.

The outlook is not so good for group owners of local stations who started to spend less on the shoe-leather necessary to secure local advertising contracts in the 1990s, dazzled by the lucrative opportunities presented by big-name national brands. Unfortunately, the national advertising market is fickle and media buyers now have a longer list of options than ever before, at more competitive prices than ever before. It’s all very well for some current owners to be busy ‘transforming’ local radio licences into national brands, but the market for national radio advertising has shrunk by 40% over the last six years. Now, a much smaller cake has to be divided by a greater number of national radio brands.

The revenue data also contradicts the message repeatedly broadcast by Ofcom in recent years that national radio brands represented ‘the future of radio’. Betraying a lack of understanding of the radio advertising market, Ofcom ignored double-digit declines in national advertising revenues that were evident as early as 2005, instead insisting that national brands on digital platforms were what listeners and advertisers wanted. To date, not one commercial digital radio station broadcast on DAB has produced an operating profit, and consumers’ preferred source for national radio remains the BBC. Commercial radio used to be good at genuinely local radio, so deliberately giving it up was never a sensible idea.

One characteristic that too much of UK commercial radio presently lacks is ‘excitement’, for both listeners and advertisers. More so than ever in these days of media overload, you have to create a distinct ‘buzz’ around your product to attract attention. Being in the marketplace is simply not enough. I only realised how much I have missed that kind of radio excitement when I stumbled across a local commercial station this week that entertained me enough to make me stop what I was doing and listen intently. It even played three of my all-time favourite songs in a single hour.

Unfortunately for the financial health of the UK radio industry, that station serves Lafayette, Louisiana – metro population 257,000. Deservedly, it ranks #2 in the market.