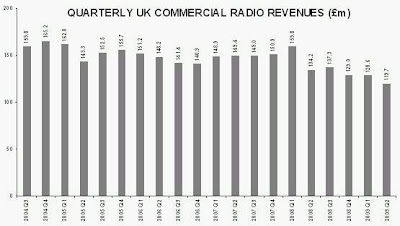 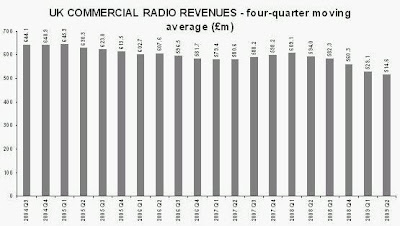 Whatever may be going on elsewhere in the economy, it is hard to see any green shoots of recovery in the UK commercial radio …. yet. Total revenues in Q2 2009 fell by 10.8% year-on-year to £119.7m. Initially, this might look mildly positive compared to the 19.5% year-on-year fall experienced last quarter. But remember that the downturn in UK radio first hit in Q2 2008 and had already reduced that quarter’s revenues 10.1% year-on-year. As a result, Q2 revenues in 2009 are now 20% below what they had been two years ago, a decline so significant that it will prove difficult to recapture even when the economy does improve.

The notion that UK commercial radio is merely experiencing a cyclical blip and will quickly show recovery once the overall economy improves is a great feelgood story, but one that is not supported by the industry’s own data. Long before the ‘credit crunch’ hit us all, UK commercial radio revenues were already showing structural decline, a trend that the current economic cycle has merely exacerbated. 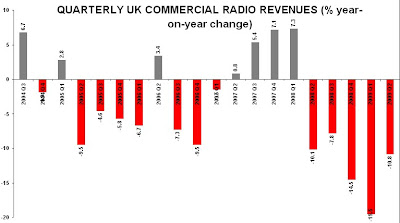 The seemingly widely held belief that commercial radio MUST continue to exist in its present form because it is a highly regulated and licensed industry is simply false. If there was one lesson that should have been learnt from the implementation of DAB radio in the UK, it was that ensuring that a small group of commercial interests control a technology and the access to it counts for nothing if there is almost no demand for it. With DAB, radio broadcasting groups got what they wanted – their cartel became the licensed gatekeeper and owner of DAB. But if nobody wants your DAB, you are left being gatekeeper to a field of nothing.

It’s the same with commercial radio. If advertisers and listeners don’t want your product, there is no reason for it to exist, regardless of you waving around your scarce Ofcom licence. Not so long ago, station owners could still foist crappy radio content on the public because listeners were starved of alternatives, but digital audio and the internet have changed that FOREVER. No longer is there any market for second-rate radio. And, in commercial radio, if unwanted or irrelevant content doesn’t attract listeners, it won’t last long.

In this context, the latest Ofcom radio

consultation (“Radio: the implications of Digital Britain for localness regulation”) is a remarkably disappointing document. At a time when commercial radio is at a crossroads in so many senses (profitability, consolidation, platforms, localness, public service, interactivity, CPM, etc), this latest chapter in Ofcom’s many attempts to map out “The Future Of Radio” is no more than tinkering at the edges of existing radio regulation.

What was needed was a full-blown, courageous effort to overhaul the radio regulatory system in order to ensure that commercial radio continues to exist financially and that the diminishing number of licensees genuinely serves the public’s articulated radio needs. Instead, we have an Ofcom consultation that is no more than a grudging reaction to Lord Carter’s Digital Britain proposals, some of which are now adopted as if they were Ofcom’s own, some of which are watered down, and some of which have been ignored altogether.

The reluctance drips from every page. There are 81 uses of the word ‘if’ in this 82-page document. Almost every one of its proposals is tainted with uncertainty – “if and when new legislation is passed” or “if Parliament decides not to take forward”. Rather than seizing the opportunities that arise from the painful ‘crossroads’ when change is an inevitable necessity rather than a nicety, Ofcom seems happy to sit in the back seat and respond “whatever!” to ideas it receives, rather than grabbing at innovation and pushing it forward. It reads very much as if written by nobody who has ever themselves run a commercial business where painful life and death decisions have to be made, sometimes at breakneck speed and often without the aid of a parachute.

Only one thing is certain – Ofcom will be drowning in consultations for the foreseeable future. These five proposals alone (out of eight) multiplied by 300 stations plus DAB multiplexes yields a potential 1,000+ new consultations or requests. And yet the document claims that these Ofcom proposals are “broadly deregulatory”.

Sadly, more than anything else, the Ofcom document completely lacks any kind of vision as to what the commercial radio landscape might look like in the future, the antithesis of what the Digital Britain consultation exercise was trying to achieve. This is a missed opportunity for Ofcom. Not just this latest document, but in 2009 when the whole “what is the future of radio?” debate is probably at the most critical point in commercial radio’s history. It appears to many in the industry that Ofcom has simply disengaged from radio. This is a particular irony for an industry that prides itself on its success in one-to-one communication.

It may seem a stupid question……. If Ofcom still sees itself as the party with the skills necessary to make 1,000 potential individual decisions on the future of individual commercial radio stations, how is commercial radio presently in such a sad state of affairs as a result (partly) of previous regulatory decisions? We tend to respect and trust people who can demonstrate a positive track record. Why would I let a doctor operate on me who had killed almost every patient he had ever consulted?