UK commercial radio has been in the doldrums for the last decade. Its audiences have been battered by competition from the BBC, revenues have been declining, and some local stations have been forced to close or merge (sorry, ‘co-locate’). So, when a piece of good news comes along, it is natural that it will be celebrated. The latest RAJAR audience survey for Q2 2010 provided just one such fillip of positivity for the commercial radio sector. But, sometimes, what should have been a small private party gets turned into a showy public display of excess by the celebrants.

This appears to have been the case with commercial radio’s take on its latest audience figures. Maybe it was the effects of too much champagne, but the RadioCentre press release stated:

“This is a fantastic set of results for the commercial radio sector showing long-term and sustained growth by every measure.”

This might have been an appropriate thing to say to a roomful of cheering partygoers but, in the sober light of day, sticking this claim in a press release was bound to invite closer scrutiny. In the following graphs, the main RAJAR metrics for UK commercial radio are put in historical perspective. In these graphs, we are seeking what RadioCentre told us is “long-term and sustained growth” in “every measure.” 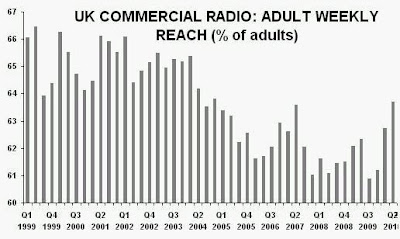 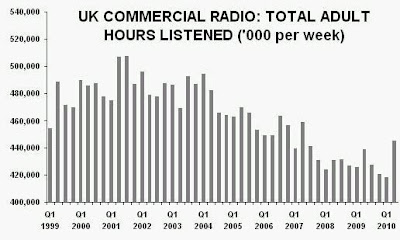 UK commercial radio total adult listening hit an all-time low the previous quarter (Q1 2010) of 419m hours per week, then bounced back in Q2 2010 to 445m hours per week. Growth? Yes (one quarter). Sustained growth? No. Long-term growth? No. 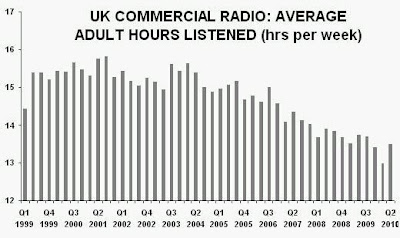 UK commercial radio average hours listened per adult listener hit an all-time low of 13.0 hours per week the previous quarter (Q1 2010), then bounced back in Q2 2010 to 13.5 hours per week. Growth? Yes (one quarter). Sustained growth? No. Long-term growth? No. 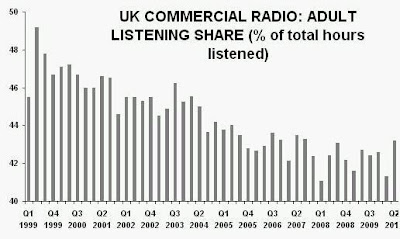 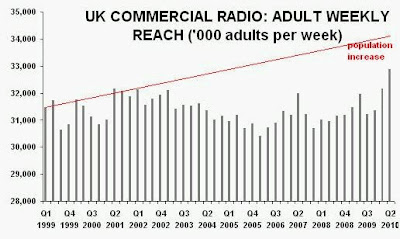 So, in total, it seems impossible to locate commercial radio’s “long-term and sustained growth” in the latest RAJAR data. I point out these facts because I want to see commercial radio succeed. The sector desperately needs to attract more hours listened in the long term if it is to improve revenues and return to profitability. This has not yet happened. There is no point pretending that it has.

What is to be achieved for the radio sector by the RadioCentre press release crossing that line between hype and untruth?