A ‘thought piece’ by Ipsos MediaCT, entitled ‘The Future of Radio’, identified the many challenges for the government’s proposed digital radio switchover to be successfully implemented by the 2015 target date:

• digital listening share has to more than double in just four years
• the UK’s DAB coverage [..] is currently around 90%, but there is now the need to extend it across all the UK population
• a requirement to improve the quality of [DAB] reception and sound
• the issue of people having to replace their analogue radio sets
• less than 1 in 10 of these [existing radio] sets is DAB, so a very significant number of replacements need to be sold
• all manufacturers are committed to producing sub-£20 sets in the next two years
• more digital radios need to be fitted in new cars and more digital converters need to be sold for existing cars
• take-up of digital platforms has been steady, but not remarkable
• digital listening has a long way to go to meet the Government’s targets
• there are a number of barriers to overcome to meet the demands of the Digital Britain Report, which require investment – in a recession – and co-operation between manufacturers and broadcasters
• DAB will have to be marketed properly and quickly

A Capibus study conducted by Ipsos found that a high proportion of radio receivers were tuned to the same station most of the time:
• 86% of kitchen sets
• 79% of bedroom sets
• 74% of living room sets
• 70% of car radios

“What happens when the switchover occurs and the station now only broadcasts on DAB? Do listeners go out and buy a new DAB set for each room in the house or switch their listening to another station or stop listening? This will be a major issue for stations and their audiences. It will be the listener who will be in control of radio’s digital destiny.”

It was a surprise to find that the entire front page of the most recent issue of the World DMB Forum’s global newsletter (‘Eureka!’) was filled with an article that did not extol the virtues of the DAB/DMB platform, but instead tackled the online radio platform and drew the conclusion that the internet “will NOT replace traditional broadcasting”. The article, entitled “The Future Of Radio”, sought to debunk the assertion that “the internet is the future of radio”.

The article continued: “Given the outstanding success of the BBC’s iPlayer, it is surprising to learn from RAJAR’s latest audience figures that ‘radio via the Internet’ (in all its forms: live streaming; on-demand services and podcasting) accounts for only 2.2% of radio listening in the UK.”

Interestingly, exploring the latter metric, RAJAR’s own research (as part of its MIDAS survey, rather than the main diary survey) found in December 2008 that the weekly reach of all internet-delivered radio content in the UK was 14%, compared to the DAB platform’s weekly reach of 17.8% during the same quarter (see graph below). Ten times more popular? The platforms were almost neck-and-neck in the ‘reach’ metric. I wrote about this research a year ago. It is the closest we have for now to a like-for-like comparison that includes all forms of audio delivered by the internet. 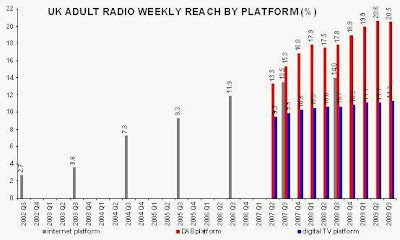 The most recent reach data for the internet platform in the above graph derives from Q3 2008 because RAJAR has not publicly released comparative data derived from its two subsequent MIDAS surveys (which are now only available on subscription).

RAJAR was keen to stress in its press release accompanying this week’s latest MIDAS 5 survey that:

“74% of those Listen Again listeners said the service has no impact on the amount of live radio to which they listen, while half said they are now listening to radio programmes to which they did not listen previously”.

Somehow, the Daily Mail managed to mangle this factual statement into something that, yet again, portrayed the internet platform as an aggressor against DAB:

“Rajar says the figures do not mean people are abandoning traditional or DAB radio sets but that more Britons are trying and using online stations as well.” 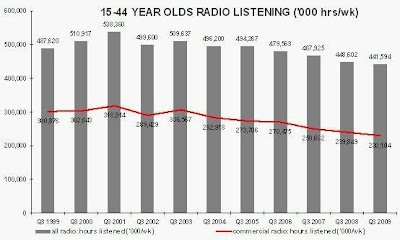 The problem the radio industry faces with the RAJAR audience metric is that it cannot have its cake and eat it. Either it chooses:

* to restrict RAJAR to measuring ‘traditional’, live radio and accepts that, as a result, the data will inevitably show that listening to ‘traditional’ radio is in continuing decline (which is RAJAR today, see graph above); or

* to expand the RAJAR metric to measure ‘audio’ consumption that includes on-demand and podcast content, as well as non-traditional radio such as Spotify and Last.fm, thus demonstrating that total listening is not at all in decline but, on the contrary, has been enhanced by audio content increasingly consumed via non-broadcast platforms and ‘on the go’.

For the BBC, Director of Audio & Music Tim Davie hinted at the last RadioCentre conference that he would be interested to see RAJAR extended to encompass time-shifted and downloaded audio, both of which account for an increasing proportion of BBC radio listening.

For its part, commercial radio has shown no interest in advocating such a re-definition of the RAJAR metric. Not only do its offerings of time-shifted and downloadable audio remain miniscule compared to the BBC, but it is locked into a strategy to maintain its ‘walled garden’. Understandably, it has no desire to demonstrate to the world that it is losing listening to competitors’ time-shifted audio and online ‘radio’. UK commercial radio has enjoyed a nice little over-the-air duopoly from 1973 until recently – best just to pretend that it remains one of only two games in town.

The paradox here is that commercial radio is busy presenting advertising agencies and potential advertisers with RAJAR data that only tell part of the story of how and what audio people are listening to in 2009. However, once their meetings with commercial radio people are over, those same advertisers and agencies will inevitably be busy booking advertising with all sorts of online media, including Last.fm and Spotify. They know precisely what opportunities are out there in the wide world beyond traditional broadcasting.

Simply ignoring new businesses that are competing for your listeners’ attentions is not going to make them go away. Sticking your head in the sand can only have the effect of devaluing RAJAR as a useful and accurate metric in the long term.