There has been an abundance of fighting talk from the commercial radio sector in the press in recent weeks. Commercial radio seems determined to pick another fight with BBC Radios 1 and 2, two of the three most listened to radio stations in the UK.

“We are still at war with the BBC and we still compete for listeners tooth and nail, as we always will.”

Then, Global Radio announced that its local FM stations will be re-branded ‘Capital Radio’ in 2011. Chief executive Ashley Tabor said:

“With the launch of the Capital network, there will now be a big national commercial brand seriously competing with Radio 1.”

Both the GMG and Global Radio statements achieved the intended sabre-rattling headlines in the press though, for me, these sentiments are remarkably hollow. This ongoing phoney war between the BBC and commercial radio is like a war between a one-eyed giant and an over-exuberant mobile phone salesman. The giant will win every time. Commercial radio can huff and puff all it wants, but the BBC knows it is perfectly safe in its house built from Licence Fees. It can afford to chuckle loudly at every challenge like this lobbed at it by commercial radio. Why?

Firstly, you could only ever hope to seriously compete with the existing formats of BBC Network radio stations if you had access to their same abundance of resources. This is something that Channel 4 belatedly realised after having promised for two years that it would invent a new commercial radio station to compete with BBC Radio 4. Then it scrapped its radio plans altogether. 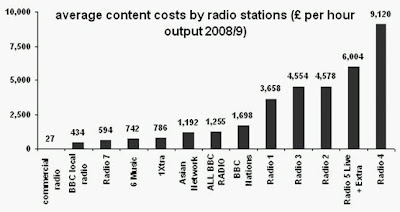 Secondly, what sort of message do these press headlines send to consumers? To me, they say ‘we realise that Radios 1 and 2 are fantastically successful, so we want a slice of their action’. Or maybe even ‘you really like Radios 1 and 2, don’t you? Try us, because we want to be just like them.’ So where is the Unique Selling Point [USP] for your own product? Don’t you have enough faith in it to tell us why it is so good, rather than comparing it to your much bigger, much more successful rival? Or is this the Dannii Minogue method of marketing?

I had always been taught that the cardinal sin of radio was to mention your competitors to your audience. Every reference to your competitor tells the audience how much you respect them and their success. Ignore them! Pretend your competitor does not even exist! Plough your own furrow and concentrate on making a radio station that is genuinely unique. Then you will create a brand that has a genuine USP, rather than being merely a pale imitation of Radio 1 or 2 without their big budgets. ‘I can’t believe it’s not Radio 2’ is not a tagline to which to aspire.

Thirdly, neither Capital Radio nor Smooth will be genuinely ‘national’ stations, as in capable of being received on an analogue FM/AM radio from one end of the country to the other. So why pretend to consumers and advertisers that they are ‘national’? In the case of Capital, its proposed FM network presently covers 57% of the UK adult population. In the case of Smooth, RAJAR tells us that DAB receiver penetration is presently 35%. Just how little of the UK population can you cover and yet still describe yourself as ‘national’?

Fourthly, don’t keep looking at Radio 1 and 2’s huge audience figures and dreaming of how much money you could make if only you could monetise their listenership. Part of the reason older listeners probably like Radio 2 is because there are no advertisements. Accept the fact that Radios 1 and 2 together account for a quarter of all radio listening in the UK. Compared to those mammoths of radio, both Capital and Smooth are mere termites. Live with that fact and, instead, seek out commercial clients who are not merely frustrated because they cannot advertise on BBC Radio, but who actively want to use your radio station because your audience is intrinsically valuable to them.

Finally, invest the time and money to develop your own on-air talent rather than simply hanging on the coattails of others’ successes. Whatever his next gig might be, Chris Moyles will forever be remembered as ‘the saviour of Radio 1’, just as Chris Evans will always be remembered for his Radio 1 breakfast show, not for his subsequent time at Virgin Radio. Find new people who are good at radio and put your faith in them. Why does Smooth’s schedule have to resemble Frankenstein’s monster, stitched together with a bit here from Radio 1 in the 80s, and a bit there from Radio 2 last month?

What your radio station should be doing is not competing with Radio This or Radio That for listeners, but competing directly for consumers to spend time with you because you are ‘you’. Radio is not like selling soap powder or yoghurt pots, where your business model can be built upon undercutting the price of a competitor’s product, however low-quality your own cheapo version might be. There is no price of admission in radio. Your content needs to be ‘different’ rather than ‘the same’ and it needs to create its own unique place in the market.

You should not think of your market competitors as radio stations, but as each and every opportunity a consumer is presented with to pass their leisure time. A winning station must be able to convince a consumer to listen to it, rather than watch television, read a book or simply sit in silence. Because radio is ‘free’, the competition for radio is everything else that is also free to consumers at the point-of-use.

To offer a practical example, when I worked on the launch of India’s first commercial radio network, Radio City, the advertising agency produced an excellent marketing campaign that extolled the virtues of the station over other radio stations. But the campaign had to be rejected and the agency briefed in more detail. Why? Because we were launching the very first radio station on the FM dial in a city such as Bangalore, so the overriding challenge was to persuade people to use ‘radio’ at all, or to persuade people to buy an FM radio for the first time, or to persuade people to switch off their television and turn to radio instead.

This philosophy seems to be a million miles away from the current UK commercial radio strategy which seems to focus on berating BBC radio for being too successful, whilst wanting to somehow achieve part of that success through osmosis. If only half this war effort was put into developing policies to make the commercial sector’s stations successful on their own account, the BBC would soon cease to matter.

Instead, RadioCentre is now demanding that commercial radio be allowed to re-broadcast old Proms concerts recorded by BBC Radio 3. But how many of our 300 commercial radio stations play classical music? One. And which Proms concert do you recall that would fit into Classic FM’s playlist of short musical extracts? What next? Will Capital FM be asking the BBC for the rights to re-broadcast some old Zoe Ball Radio 1 breakfast shows?

In September 2010, the government’s Consumer Expert Group criticised RadioCentre for having proposed a policy for the BBC’s Strategy Review that, it felt, would have “bullied” listeners.

Trying to bully listeners? Trying to bully the BBC? This is the war of the playground, not of a mature media industry that has a strategy of its own making, a plan, a roadmap for its future success. “It’s not fair. Your willy is bigger than mine.” No, it probably isn’t fair, but life deals you a hand, you have to stop whining, get on with it and make the best of what you’ve got.

Just accept this reality: commercial radio’s willy is never going to be as big as the BBC’s. So competing directly on size alone is a complete waste of time when, instead, you should be developing your own individual ‘technique’.

I was interested to see your article in The Guardian, on behalf of the BBC Trust, defending Radio Two from accusations made by the commercial radio sector that the station has deliberately sought a younger audience. You say:

“What about the challenge that Radio 2 is getting younger? We found that Radio 2’s under-35 audience did grow significantly between 1999/00 and 2004/5 (albeit from a low base). However, over the past five years, the age profile of the station has remained stable and there’s been no increase in reach to under-35s.”

Your analysis here focuses on two specific metrics – under 35’s and Radio 2’s ‘reach’ – whereas the important issues raised by commercial radio rightly concentrate on:
• Commercial radio’s ‘heartland audience’ of 15 to 44 year olds, which it has pursued for many years as a result of advertiser demand to reach this segment of the population;
• ‘Share of listening’ as the appropriate metric because there is a direct correlation between this figure (how many hours are listened to commercial radio) and how much revenue the sector generates.

The graph below, taken from RAJAR data, shows the ‘share of listening’ attracted by BBC radio stations amongst 15-44 year olds since 1999. 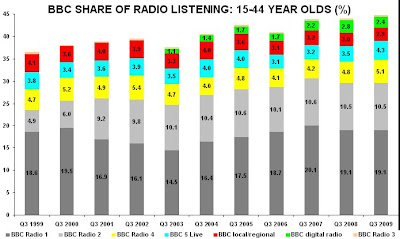 It is evident that the listening share of most BBC stations has remained relatively static over this period. The exception is Radio Two, whose share of listening amongst 15-44 year olds has more than doubled from 4.9% to 10.5% over the last decade. It is true that this growth has started to level out in recent years, as your article asserts, but there is no denying that the damage has already been done.

The graph shows clearly that this significant increase in listening has not been achieved by migration from competing BBC radio services to Radio 2. On the contrary, the BBC’s overall share of listening amongst 15-44 year olds has increased from 36.5% to 44.7% during the last decade and, most importantly for commercial radio, is continuing to grow year-on-year. 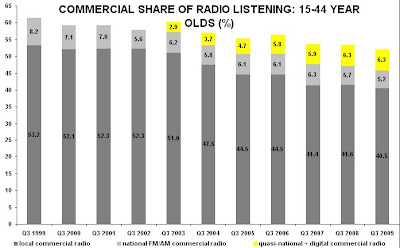 The danger for the commercial radio sector is that, if its market share falls below 50%, potential advertisers might no longer consider radio to be the ‘powerhouse’ delivery platform amongst 15-44 year olds that it used to be. The impact will not simply be a proportional loss in advertising revenues, but a significant loss of confidence in radio as an advertising medium to reach 15-44 year olds.

This is why, inside the BBC and Radio Two, a change in strategic policy might look as if it only results in an increase in BBC market share of a percentage point or two. For the commercial sector, not only does that single percentage point lead directly to a proportional loss of revenue but, sustained in the longer term, it can potentially undermine the medium’s ability to convince advertisers to use radio rather than, say, digital TV or the internet.

This is why the promise you make that “Radio 2 listeners won’t get any younger” is little comfort to a sector that has already been damaged by BBC strategic policies and which is continuing to lose market share year-on-year amongst its ‘heartland audience’ to BBC radio as a whole.

Of course, some of this listening loss can be attributed to commercial radio’s own competitive (in)ability to compete with the BBC – I would be first in line to argue that case – but unless its downward spiral of diminishing listening and diminishing revenues can be reversed, commercial radio could be decimated to the point where it can no longer be a financially viable business.

I write to you not to criticise Radio Two, which is a remarkable station, nor to apologise for the commercial radio sector, which has to shoulder considerable blame for losing touch with its audience. I write to illustrate that the industry’s own data clearly shows the BBC continuing to eat away at commercial radio’s ‘heartland audience’, and I write so that the BBC Trust might understand the consequences if the migration of radio listening to the BBC continues at its current rate.