A reader comment appended to an online newspaper story this week about the decision of some commercial radio station owners to launch an anti-DAB radio marketing campaign said jokingly:

“Now all that’s needed before Christmas is for ‘Which’ to warn consumers of moral hazard in purchasing DAB radios.”

In fact, last month, ‘Which?’ [the UK consumer organisation] published its list of ‘Seven Christmas gifts to avoid’, two of which were DAB radio receivers. According to Which?:

One of the enduring problems that has contributed to the slow take-up of DAB radio in the UK has been the consistently high retail prices of DAB radio receivers compared to analogue models. The radio industry has promised repeatedly over many years that the retail price of DAB radios would fall. It has, but nowhere near as much as hoped.

In order for unit prices to fall further, DAB radio receivers would have to be manufactured in production runs of millions in factories in China. Because the notion of DAB radio has failed to excite consumers during the last decade, not only in the UK but across Europe, those high production runs have not been achieved, so that the unit prices remain relatively high (average price paid in Q1 2010 was £91).

The problem with trying to produce low-price DAB radio receivers is that something inside them has to be sacrificed to keep costs down. Whereas the UK’s FM transmission system is sufficiently robust to permit usable reception of radio stations on even the cheapest hardware, the DAB transmission system is still not robust enough for usable reception in many circumstances. Additionally, with analogue radio, poor reception equals background noise and interference. Whereas, with DAB radio, poor reception equals no audio whatsoever.

This issue has long been known by the UK radio industry, but it proves a lot easier to ignore it than to fix it. So, the £55m marketing campaigns to persuade consumers to purchase DAB radios continue, despite the radio industry being aware that many consumers are likely to have unsatisfactory experiences with their newly purchased DAB radios.

At the Digital Radio Stakeholders Group meeting on 1 November 2010, UK manufacturer Roberts Radio admitted to pulling the plug on several receiver projects, including the industry’s long promised ‘£25 DAB radio’, because they could not meet Roberts’ minimum quality standards. Leslie Burrage, chief executive of Roberts Radio, told the meeting that there had been a 35 to 40% consumer return rate for its in-car DAB radio adapters.

Roberts Radio, unlike competitor Pure Digital, has been outspoken about its concerns that DAB radio is being marketed wrongly to UK consumers. Owen Watters, sales/marketing director of Roberts Radio, told the Digital Radio Stakeholders Group that he felt such campaigns should be advocating the merits of the DAB radio experience, rather than threatening consumers with the prospect of digital radio ‘switchover’.

The government’s Consumer Expert Group [CEG] raised these issues in its critical report on DAB for the government in September 2010. The government published its response to those criticisms on 30 November 2010:

Consumer Expert Group: “A clear and balanced public information campaign needs to be implemented through a trusted body, independent of the industry.”
Government: “If a decision is made to implement a digital radio switchover, we agree that a clear and balanced consumer information campaign will be important. A strategic plan for such a campaign is a central component of the Digital Radio Action Plan and we have invited representatives of the CEG to play a key role in advising on its development, for example through representation on the Market Preparation Group.”

Consumer Expert Group: “Emphasis should not be placed on driving down costs unless the sound quality and functionality of cheaper DAB sets are at least equal to analogue.”
Government: “There is clearly a balance to be struck between reducing the cost burden on the consumer of a digital radio switchover, and ensuring devices are of a good standard and offer additional benefits to the listener. We want to see a competitive market for receivers which offers consumers choice on innovation and price.”

These government responses seem to qualify as ‘non-answers’ of exactly the type we have become all too used to when difficult, but important, issues have been raised about DAB radio implementation in the UK. The prevailing philosophy justifying DAB seems to be: ‘ask me no questions, I tell you no lies.’

The Daily Mail is the perfect medium to scare middle Britain into reaching for its credit card. So it was no surprise to read in Saturday’s edition that:

“Four out of five car radios are expected to become obsolete in less than five years, experts warn.”

Why? Well, according to the Daily Mail, because “the traditional FM and medium-wave signal is due to be switched off in 2015.” To back up this assertion, the Mail quoted Car magazine associate editor Tim Pollard:

“In four years’ time, 80 per cent of car stereos won’t work and many sat-navs will be unable to receive traffic data. If you’re buying a new car, you must tick the option specifying DAB now.”

Wrong. Wrong. Wrong. As the majority of the 83 Daily Mail readers who commented online about this article pointed out, the facts are:
* FM and AM radio are not going to be switched off;
* 2015 has not been agreed as a date by anybody for anything;
* FM and AM radios will not become “obsolete.”

So why are these untruths being distributed by Car magazine and the Daily Mail? Because they seem happy to regurgitate propaganda produced by commercial companies who, as a last resort, are reduced to scaring the public into buying DAB radios. UK car audio fitters, UK car radio manufacturers and UK audio retailers would all benefit financially from the public suddenly buying DAB radios en masse. Persuasion has failed as a tactic to grow DAB radio take-up over the last decade … so the strategy now is to scare them into putting their hands in their pockets. 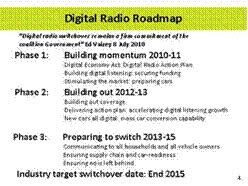 This strategy is all part of a DAB radio ‘roadmap’ developed by lobby group Digital Radio UK. Its ‘Phase 1’ activities for 2010/2011 include “stimulating the market: preparing cars” or, in plain English, forcing DAB upon car owners through articles like the Daily Mail’s. Digital Radio UK revels in disinformation, consistently referring to ‘digital radio’ in its recent slide presentation to the Digital Radio Stakeholders Group, when its sole imperative is to push DAB radios. 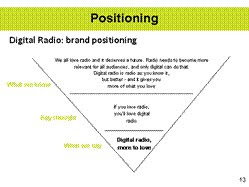 This Digital Radio UK presentation is full of stuff that reads like it was written on the back of an envelope in the pub one lunchtime. The industry has had almost two decades to come up with a powerful ‘brand positioning’ for DAB, yet the best that Digital Radio UK could create is:

“WHAT WE KNOW. We all love radio and it deserves a future. Radio needs to become more relevant for all audiences, and only digital can do that. Digital radio is radio as you know it, but better – and it gives you more of what you love.
KEY THOUGHT. If you love radio, you’ll love digital radio.
WHAT WE SAY. Digital radio, more to love.”

Expect to see these, er, important characteristics of DAB radio espoused in a £0.5m pre-Christmas marketing campaign that will tell consumers: “There’s a digital radio for everyone this Christmas.” Cynics will respond that this is because warehouses are brimming over with crates of unsold DAB radios. 2010 must have been a disastrous year for DAB receiver sales because the industry has kept the figures a closely guarded secret. Pure Digital, which accounts for the lion’s share of DAB receiver sales, said last week that its “revenues are now expected to show a decline compared with the first half of the previous financial year.” In 2009, total UK unit sales of DAB radios had already fallen year-on-year [see my earlier blog]. 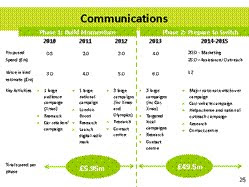 Between now and 2015, Digital Radio UK plans to spend £55m on campaigns to try and convince consumers once more that DAB radio is a ‘must have.’ At a time when budgets are being slashed in both commercial radio and BBC radio (which fund Digital Radio UK), you might think that somebody somewhere might ask if it is worth throwing more good money after bad. And what is the stated objective of all this effort? According to the final slide of the Digital Radio UK presentation:

“Our ‘destination’ is a healthier radio sector – and that’s good for everyone.”

A healthier radio sector? You must mean a more impoverished UK radio industry, it having already thrown £1bn into the DAB black hole. You must mean digital radio stations, none of which generate a profit because, in aggregate, they attract only 5% of radio listening. You must mean consumers who are being lied to that their FM/AM radios will no longer work in 2015. You must mean frustrated car owners (according to Roberts Radio, a 35-40% customer return rate for in-car DAB radio adapters).

How are these outcomes good for anyone other than the lobbyists and radio receiver manufacturers whose shirts will be saved if, and only if, the public complies by rushing out to buy lots of DAB radios?

[Should you remain unconvinced to buy a DAB radio in December, you can look forward to a January marketing campaign that will proclaim: “If you didn’t get a digital radio for Christmas, now’s the time.” This must be my favourite radio sales pitch of 2010.]