The latest RAJAR ratings data for Q2 2011 demonstrate the continuing strength of the radio medium in recession Britain. Maybe if your TV or mobile subscriptions are having to be pruned, you turn to radio instead. In times of austerity, one of radio’s greatest attributes is that it appears to consumers to be available ‘free’ at the point-of-use. 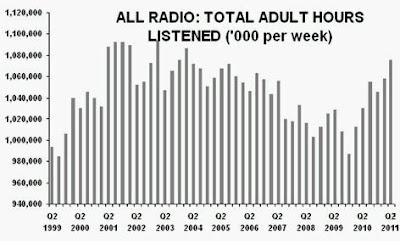 ‘All radio’ listening (1,076m hours per week) is at its highest since 2003. Adult weekly reach is 91.7%. Each listener spends an average 22.6 hours per week with ‘radio.’ These are impressive numbers. In this respect, it is important to remind ourselves that the RAJAR definition of ‘radio’ excludes:
• ‘listen again’ consumption of broadcast radio (online catch-ups of ‘The Archers’, for example)
• all podcasts
• listening to pure online radio stations
• listening to online music streaming services or personalised online radio (Last.fm, Spotify, etc).

If these additional ‘radio’ consumption sources could somehow be added to the RAJAR data, it looks likely that, using a wider definition, ‘radio’ would be performing at an all-time high. This is not at all surprising in our time-precious, multi-tasking world. Radio proves the perfect aural accompaniment to online social activities, whereas it is nigh impossible to watch television or read a newspaper at the same time as you browse the internet. Radio is a secondary medium – it never monopolises your time.

Commercial radio has benefited from this uplift in total radio listening. Total hours listened to commercial radio (470m per week) have risen from what is beginning to look like a nadir in early 2010. 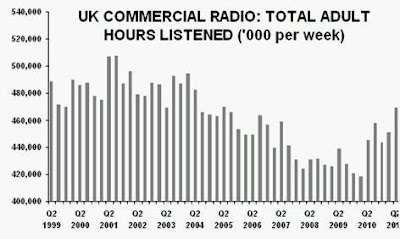 During the last two quarters, commercial radio’s adult weekly reach has jumped above the 65% threshold (65.5% in Q2 2011) that had not been breached since 2003. 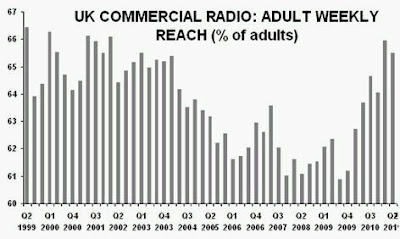 In absolute terms, commercial radio’s adult weekly reach has almost caught up with the UK population growth experienced since 1999, rising to 34m in Q2 2011, marginally below its all-time high the previous quarter. 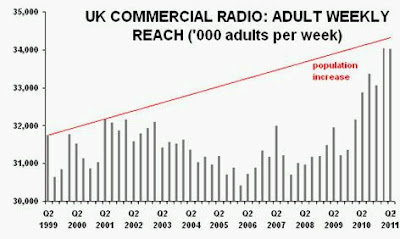 The remaining stumbling block for commercial radio is that its average hours consumed per listener remain stubbornly low (13.8 in Q2 2011). As noted previously, young people are spending less time with radio [see my blog]. Commercial radio’s audience is considerably more youth-orientated than BBC radio, which is why the average length of time for all adults listening to commercial radio remains in the doldrums. 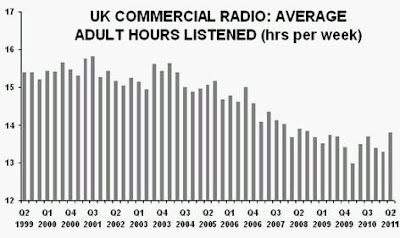 With all this good news for the commercial radio sector, you might imagine that its share of total radio listening had started gaining in leaps and bounds at the expense of the BBC. Unfortunately, this is not the case. The BBC has benefited just as much as commercial radio has from the overall increases in radio listening. As a result, everyone’s volumes are ‘up’ and the share of commercial radio versus BBC radio has remained relatively constant. In Q2 2011, commercial radio’s 43.7% share was certainly an improvement on the situation in 2008, when it had looked as if the 40% barrier might be plumbed for the first time. 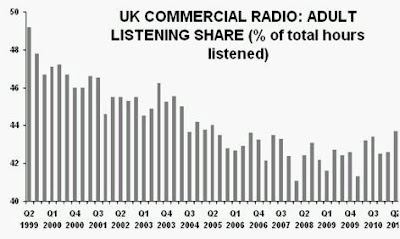 In fact, the BBC’s sustained strength in radio is becoming increasingly understated as more and more ‘radio’ listening is attributable to ‘listen again’ on-demand usage and podcasts. The BBC dominates the content available on both these platforms, whilst commercial radio’s offerings remain relatively sparse. At present, neither platform is measured within RAJAR. If they were, commercial radio’s share would undoubtedly be diminished further.

And who pays for RAJAR? The BBC and commercial radio. So we are stuck with an old fashioned metric that does not measure radio consumption in the 21st century sense of what we now call ‘radio,’ but which keeps both its paymasters happy … particularly as neither the BBC nor commercial radio would currently wish to demonstrate publicly the increasing popularity of online ‘radio’ consumption – which remains the biggest long-term external threat to them both.