Speaking today at the Intellect conference in London, broadcasting Minister Ed Vaizey tried to assure us that digital radio switchover was still “on course” to happen in the year twenty something or other:

Within hours, this news was misinterpreted by one online news source as Vaizey having said:

“Forty per cent of cars have DAB [Digital Audio Broadcasting] radios as standard now, up from just four per cent a year ago.”

From ‘14% of new cars’ to ‘40% of all cars’ in a stroke of a keyboard! No wonder the article went on to assert that “the key driver to the take-up of the [DAB] technology looks like it will come from the car industry as manufacturers start to fit digital radios as standard.”

How wrong can this statement be? Fewer than 1% of vehicles on the road currently have a DAB radio. That proportion is not going to increase quickly, even by 2013 or 2015, as the government wants it to. Rather than being “the key driver” for DAB radio take-up, cars will become THE major sticking point for digital radio switchover.

The UK car industry appears to be nearing the end of its tether over the confused information that has been fed to consumers in recent years about the so-called DAB ‘switchover’ and FM ‘switch-off’ date(s). This frustration boiled over at the last government Digital Radio Stakeholders Group meeting on 17 May 2011, when Bob Davis, who heads the Digital Radio Committee of the Society of Motor Manufacturers & Traders [SMMT], stood up to offer what he referred to as a “naughty” comment:

“Jane [Humphreys, Department for Culture, Media & Sport] said earlier ‘around 2015’ for a digital radio switchover. The automotive industry has made it very, very clear, since the process began, that it needs certainty. We’ve got 2013 [as the date for a government decision on switchover] and we think we’re working towards a 2015 switchover date. With respect, Jane, I can already see tomorrow’s headlines that DCMS says ‘digital switchover delayed from 2015’ because you used the phrase ‘around 2015’. That implies a delay. It may be what potentially happens in the market – it may be 2016, it might be a bit later than that – but, for the moment, from an automotive industry perspective, every time there’s a suggestion that 2015 has stopped being the aspirational date – or might stop being an aspirational date – all that happens is [that] the automotive industry, or parts of it, is given another opportunity to say ‘it ain’t going to happen, forget all about it’ and we will end up with the bigger problem of converting vehicles already in the parc to digital, because people will just say ‘if DCMS can’t give us certainty’ – and I accept that, at the moment, you can’t – but if DCMS are saying ‘around 2015’ instead of ‘in 2015’, it reduces the opportunity for SMMT to keep telling its members there’s a deadline, and it’s ‘this’. So please could we have a little bit of caution, from an automotive industry perspective, in (particularly) government references to switchover dates.”

Jane Humphreys: “Thank you, Bob, though I think I’m right in saying that the Minister has never said ‘it will be in 2015’. He too has said that it will be in terms of … that is the target to which we are working, but what is the principal objective is that we have to meet the criteria that have been set out and we have a piece of legislation – unless I’m much mistaken – that says there will be a minimum of two years’ notice. So….”

John Mottram, DCMS: “That’s right. I’m aware of three Daily Mail articles that suggest it’s seven years, two years, five years’ delay depending upon the date, so I think in terms of coverage and it being delayed, I think that delay is already out there. But to Jane’s point, I think the Action Plan and Ed [Vaizey]’s words make it clear that it’s a consumer-led approach. The industry target date is 2015 – we’ve never shifted from that – but that decision is based on the criteria….”

At that point, the meeting was abruptly closed. What had been scheduled to be merely another ‘tick the government box’ faux consultation meeting had suddenly started to spin out of control. The natives had started to get restless. It was time to turn them out onto the street again.

When will the UK government’s proposed ‘digital radio switchover’ happen? For a long time, we had always been told that the pre-requisites were:
* market criteria that had to be reached before switchover could be announced;
* a fixed, single date for switchover to happen.

So both of these must be in the Digital Economy Bill somewhere, surely? Well, it seems that everything (except the Bill itself) points to 2015 as the switchover date. But as for the criteria?

The government’s press release of 20 November 2009 announcing the Digital Economy Bill stated:
* “Digital radio: update the regulatory framework to prepare for moves to digital switchover for radio by 2015”.

The government’s accompanying Factsheet of 20 November 2009 stated:
* “At the centre of our ambition is the delivery of a Digital Radio Upgrade programme by the end of 2015.”

However, the government’s Explanatory Notes to the Digital Economy Bill said:
* nothing about criteria that have to be met;
* nothing explicitly about a switchover date.

Published on 20 November 2009, the Digital Economy Bill itself contained nothing about:
* criteria that have to be met;
* an explicit date for digital radio switchover.

What? Is this not strange? Somewhere along the way, it seems as if the agreed criteria and the switchover date just vanished into thin air. So what happened? Let’s go back and follow the timeline of how we got to where we are now.

JUNE 2008
The Interim Report of the government’s Digital Radio Working Group recommended:
* “Government should agree a set of criteria and timetable for the migration to digital.
* These criteria should include an assessment of:
* The percentage of listening to DAB enabled devices;
* Current and planned coverage of DAB and FM; and
* In considering the case for migration we expect the Government will also want to consider the take-up of digital radio in cars, affordability, functionality, and an environmental impact plan.”

DECEMBER 2008
The Final Report of the Digital Radio Working Group recommended:
* “Three broad criteria that must be met in order to trigger the digital migration process:
* That at least 50% of total radio listening is to digital platforms;
* That national multiplex coverage will be comparable to FM coverage by time of digital migration;
* That local multiplexes will cover at least 90% of the population and, where practical, all major roads ….”
* “Government should announce a date for digital migration, ideally two years after the criteria have been met”.

JANUARY 2009
The Interim Report of the government’s Digital Britain recommended:
* “We will create a plan for digital migration of radio, which the Government intends to put in place once the following criteria have been met:
* When 50% of radio listening is digital;
* When national DAB coverage is comparable to FM coverage, and local DAB reaches 90% of population and all major roads.”

JUNE 2009
The Final Report of Digital Britain recommended:
* “The delivery of a Digital Radio Upgrade programme by 2015”
* “Included within the Digital Radio Upgrade timetable is our intention that the criteria should be met by the end of 2013”:
* “When 50% of listening is to digital; and
* When national DAB coverage is comparable to FM coverage, and local DAB reaches 90% of the population and all major roads.”

This Report also included a critically important graph (see below) which, it said, “shows the projected digital share of listening under two scenarios: organic growth and with a concerted drive to digital”. 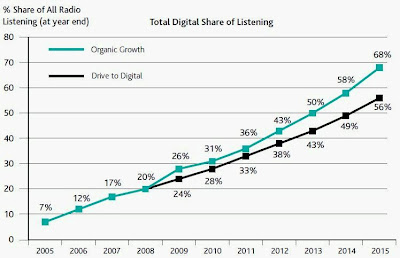 Shockingly, the historical data in this graph had been ‘doctored’ to make it look as if the faster growth path advocated by Digital Britain was easily achievable [confusingly, the key on this graph labels the lines round the wrong way]. When I queried the source of this false data, the government told me it had been supplied by another party, which I later found to be a report produced by the Digital Radio Development Bureau, but not made public. 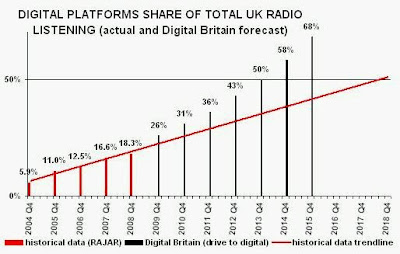 Digital Britain’s graph sought to demonstrate that continuation of the current growth trend in digital listening would lead to the 50% criterion being achieved in early 2015, whereas the actual data (from RAJAR) in my graph shows the 50% criterion not being reached until the end of 2018 [the trend line here is automatically generated by Microsoft Excel from all available quarterly data].

Digital Britain proposed policies to accelerate DAB take-up which, it said, would ensure that the 50% criterion would be achieved by year-end 2013, a gain of a little over one year from its natural trend. However, in my graph that uses RAJAR data, the acceleration necessary is shown to be five years, not one year, which would prove an almost impossible task to achieve [I wrote about the false data in June 2009].

JUNE TO DECEMBER 2009
Between the publication of the Digital Britain final report in June 2009 and today, it has slowly dawned on some of radio’s stakeholders that the agreed criteria necessary for digital radio switchover stand zero chance of being achieved by 2013. Neither do they stand a chance of being achieved by 2014 or 2015, nor probably by 2016. It always was pie in the sky, wishful thinking, fiction rather than fact. The manipulation of key data in a significant government report only demonstrates the duplicity.

So, what to do about it now? Admit you were wrong? Admit your culpability? Best to simply pretend that the criteria and the proposed switchover date never really mattered. Botched data – ignore it. Unrealistic targets – lose them. Perhaps nobody will notice the whole, sorry deception.

In the here and now, Digital Radio UK (the new organisation responsible for implementing DAB) explains the current thinking:
* “The [Digital Economy] Bill does not set a definite date for digital radio switchover …”
* “The Government has stated that switchover will not happen until the majority of radio listening is to digital, and until anyone who can currently receive FM is able to receive digital radio” [but fails to address why these criteria are not included in the Bill].

In the here and now, RadioCentre (the commercial radio trade body) explains:
* “[Digital Economy Bill Clause 30] allows the Secretary of State to set a [digital switchover] date, but does not require one to be set, or indicate when the date might be”.
* “The objective that switchover should not occur until certain thresholds have been reached for listening … appears sensible on first reading. However, RadioCentre does not believe it is appropriate for the industry to be tied to any figures in primary legislation. This is a very inflexible mechanism against which to manage our industry going forwards”.

Figures. Numbers. Dates. Criteria. This kind of factual evidence or hard data might obstruct a future decision to force consumers to switch to DAB radio.

So to answer the original question – the criteria and the switchover date that had been agreed upon by stakeholders, over two years of deliberations, have now quietly been relegated to oblivion.

When would digital radio switchover have happened if the agreed criteria had been implemented in law? Probably never.

When will digital radio switchover happen now? Whenever those in power want it to.