When UK companies that had once anticipated they were poised to make a mint out of ‘DAB radio’ realise that things are not going the way they had wanted, they lash out. That seems to be what happened yesterday. ‘Shoot the messenger’ appeared to be the digital radio industry’s reflex response when backed against a wall of facts that tell an unpalatable story.

At the Westminster Media Forum conference on digital radio, a graph of DAB/digital radio receiver sales was displayed in a presentation by The Guardian’s Jack Schofield (see below): 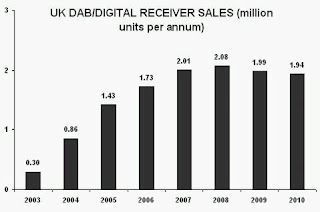 “My company supplies the chipsets that drive about 80% of digital radios on the market today. So, I think the panel today, with the exception of Andrew [Harrison, RadioCentre chief executive] is a wonderful example of how the minority seem to take the stage and voice the negativity and things. And, if we were to re-run Jack’s presentation again, put some facts in the correct order, and the correct facts, I think we would have a very different read. You know, it’s very difficult, when you have people like Jack that have a national platform in terms of a national newspaper, to voice these views.

So we’ll start with the GfK data. Now, GfK is actually a retail audit and, over the years, has been used by the consumer electronics and the retail trade in the UK to measure the sales of consumer electronic devices. In the last few years, GfK has been dying. The reason it has been dying is that it relies on the data – sales out data – from national retailers such as Dixons and John Lewis and Tesco and so on. Last year, Dixons pulled the plug on supplying data to GfK. That meant the largest retailer in the UK, which accounts for 25% of all sales, actually stopped giving them data. To carry on selling that data, [GfK] then had to formulate panels and most people in the industry know that, statistically, it’s not valid and that, basically, it’s falling apart. Now, you’ve quoted GfK [DAB/digital radio receiver] sales falling and I’ve given you the reasons why that data is not accurate. […]

This is a practical example of discrediting the data, which a number of people use to bash DAB. So this is one small example of how you’re misinterpreting and you’re misleading people. I don’t know if you understand what GfK is, or what it has done, or why it has fallen apart but, if you do, then that’s really poor. And if you don’t, before you quote it, you should learn the facts.”

The graph to which Sethill was referring was created by me and published in this blog last weekend (Jack Schofield had asked before the conference if he could use it in his presentation). I had first published these DAB/digital radio receiver sales data in a blog in January 2011, in which I wrote:

In March 2011, these same sales figures were reprinted in The Telegraph newspaper, which wrote that “new figures showed that sales of digital radio equipment actually fell last year.”

So what is eating Frontier Silicon? It seemed wholly inappropriate for Anthony Sethill to beat up panellist Jack Schofield in public for using the digital radio industry’s OWN DATA in his presentation. If Frontier Silicon has an issue with the digital radio industry’s sales data, it should take that up with Digital Radio UK, which purchased the data from GfK and distributed them.

Perhaps the real issue is that the rewards from DAB radio have evidently still not materialised for the digital radio industry. By year-end 2009, Frontier Silicon Limited had an accumulated loss of £28m. In financial year 2009, it generated an operating loss of £536,000 on turnover of £22m. Its shareholders include Digital One (owned by Arqiva) and Imagination Technologies (which owns Pure Digital). Imagination owns 9.3% of Frontier Silicon, a stake that it wrote down by £3.4m in 2008, and then finally wrote down by a further £3.6m in 2010. As Imagination’s accounts explained:

“Due to the lower resulting valuation of the business and the impact of Frontier’s capital structure, the Group’s investment [in Frontier Silicon] has been revalued to £nil.”

I guess it must be tough for Frontier Silicon to see a shareholder value its business at “£nil.” That is no reason for its unprovoked attack on Jack Schofield’s presentation which had merely used the industry’s own data.

I contacted GfK for its response to the comments from Frontier Silicon. Its response was (in full):

GfK Retail and Technology UK currently track over 100 individual technology product categories and partner with major UK multiple retailers within every single audited channel they report on, to complement this research and to ensure GfK cover the overall market they also have a representative sample of independent retailers working with them. This means GfK are receiving weekly data from over 24,000 individual stores within the UK. The majority of these retailers deliver weekly EPOS data on their complete sales and this allows GfK to report to a detailed level on the performance of all the leading technology categories. If faced with a retailer who is not willing to participate GfK employ a widely used global research methodology to ensure they are representing the overall market.

When challenged on the GfK reported performance of the DAB market Commercial Director Anthony Norman commented “the overall technology markets have all come under increasing pressure in the last 12 months, the austerity measures announced and now being implemented by the coalition government have had a major impact on consumer confidence which has in turn impacted on retail sales of technology areas”. Norman continued in specific reference to the DAB market “the reported data by GfK is based on over 70% live reported sales by retailers, rather than focussing on the downturn of this market it would be more beneficial to put the whole picture in perspective. The overall technology market has experienced only 4 months of growth in the last 33 months. The average decline in this area is 6%, for DAB the market in 2010 declined by only 2%. Given the overall sector performance this is something that should be recognised. As a business GfK are committed to delivering actionable insight to the industries they operate within”

The GfK Group offers the fundamental knowledge that industry, retailers, services companies and the media need to make market decisions. It offers a comprehensive range of information and consultancy services in the three business sectors of Custom Research, Retail and Technology and Media. The no. 4 market research organization worldwide operates in more than 100 countries and employs over 10,000 staff. In 2009, the GfK Group’s sales amounted to EUR 1.16 billion. For further information visit www.gfkrt.com or www.gfkrt.com/uk

One week earlier, British company Frontier Silicon, “market leading supplier of digital radio technology worldwide”, had announced that, in order to persuade four commercial radio broadcasters in Germany to persevere with DAB, it had promised them it would purchase an unspecified amount of their advertising airtime for the next four years.

Anthony Sethill, Frontier Silicon CEO, put a positive spin on an act that some might perceive as little more than legalised bribery in the face of desperation to sell DAB hardware in Germany: “We are delighted that our innovative approach to supporting the roll out will help everyone working on this new radio service to bring their efforts to fruition.”

For years, German transmission provider Media Broadcast has been eager to put into action its masterplan to lock new DAB+ broadcasters into minimum 10-year contracts, for which it will be charging €2m per annum per station by 2021. The combination of Media Broadcast’s enthusiasm for the financial returns from DAB transmission contracts, and Frontier Silicon’s enthusiasm for the potential sales in Germany of DAB receivers that incorporate its technology, plus the offer of an amount of cash, persuaded a few commercial broadcasters to take on the risk of using the DAB+ platform.

Helmut Egenbauer, CEO of Media Broadcast, said: “Having introduced Frontier Silicon to the commercial broadcasters, we are delighted to see that their discussions have led to this important commitment to DAB+ radio services.”

Those five German commercial broadcasters should understand that even Frontier Silicon’s subsidy might not prevent them losing money hand over fist for the entire ten years of their transmission contract with Media Broadcast. The evidence is already there from the UK market. Not one commercial digital-only radio station has yet made an annual operating profit from the DAB platform in the UK, even after eleven years, let alone come close to recouping its investment.

Research commissioned by RadioCentre in 2009 found that the average annual revenues of a digital radio station were around £130,000 per annum. By then, 10 million DAB receivers had been sold in the UK. Yet Germany is still at Year Zero with DAB+ radio penetration. The same report for RadioCentre had noted that the “annual negative cash flow impact of DAB” on the UK commercial radio industry was around £27m per annum, or 5% of sector revenues. Can German commercial radio afford to deplete its profitability by that sort of amount, year-on-year, for the next decade?

Frontier Silicon’s press release quoted Helmut G. Bauer as a “representative of the commercial broadcasters,” saying what a fantastic deal it was and promising that “2011 will be year that DAB+ is successfully launched in Germany.” However, Bauer is not associated with the German commercial broadcasting trade body, VPRT, which has been outspoken in its condemnation of plans for digital radio switchover in Germany. Bauer is a Cologne-based lawyer who has long made pro-DAB presentations at media conferences, and pro-DAB statements to the press, as a ”consultant.”

In fact, VPRT had commented: “As we know, DAB failed in the market. Against this background, plans for the closure of FM – originally scheduled for as early as 2015, but now postponed – are absurd from an economic and social perspective and are therefore unacceptable.”

“With this decision, DAB will now actually be introduced by those who have succeeded, smelling a quick buck, in selling Germans a new sort of equipment, with millions to be sunk into to a new transmission network. Our old radios will be useless for DAB. Those who want to continue listening to the radio will need a new receiver.“

“It does not take a prophet to suspect that the private radio industry has shot itself in the foot by agreeing to sign the DAB contracts. A few shekels subsidy from a chip manufacturer who wants to install as many of its chips in DAB receivers – that is what has led to this. You, dear people, were not considered in the end. Do you really believe that devices with DAB will ever be as numerous as FM radios are today?”

“No one will understand what [DAB] is and why it is good. Because, with DAB, you have solved a problem that did not exist. The existing technological distribution of radio programmes is excellent and widely used. You did not have to change anything. The argument that DAB will create new radio channels with lower entry barriers is specious, as long as media regulators continue not to award licences for technically available [analogue] frequencies because they do not want additional competition in the market.”

This week, World DMB, the body marketing DAB radio globally, was so excited by developments in Germany that its web site posted seven news stories about it on the 15th, nine on the 16th and a further four on the 17th. The overkill speaks volumes. Lacking any upturn in DAB receiver sales, the only positive news that DAB lobbyists can muster is this second attempt in Germany to launch a DAB technology that was first developed in 1981.

It is hard to recall a comparable technology whose proponents were still pushing for its launch three decades after its invention. DAB proponents argue that, simply because DAB is ‘digital’, it is inevitable that it will replace analogue radio. History indicates otherwise.