I’m a numbers man. I can tolerate a little numerical exaggeration, a few rounding ups, or even the odd ‘nearly x million’. But when people invent numbers and stick them in their press releases, I reach for my calculator. Not for the first time, today Digital Radio UK advanced the concept of ‘mind over mathematics’ to a new level. 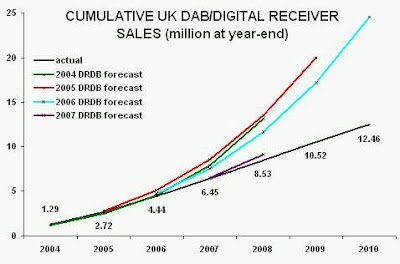 In its press release of 21 December 2010, Digital Radio UK estimated “that due to strong Christmas sales, over two million digital radios will be sold in 2010.” I questioned how this could be true in my blog. Turns out that it wasn’t. 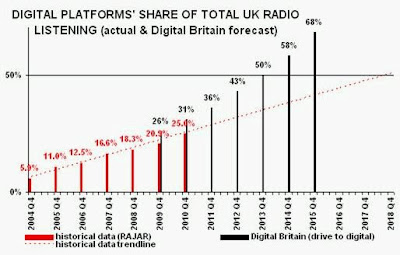 “If this annual growth rate [in digital radio listening] is sustained, then the Government criterion of 50% of digital listening will be achieved in 2014.”

This is mumbo jumbo rubbish from people who like to use numbers to baffle the public and to obscure the truth. The 50% threshold is no more likely to be reached in 2014 than it is in 2013, which had been the original government target. A trendline* through six years of quarterly data (see graph above) shows that the 50% criterion will not be reached until year-end 2018.

So what happened to the original 2013 target for 50% that had been set by the government’s 2009 Digital Britain report? It now seems to have been completely forgotten. No explanation, no apology – just ignored (in June 2009, I had predicted that the 2013 target would prove “impossible”).

So how confident is Digital Radio UK that its new 2014 target is attainable? Enter stage left its CEO, standing next to a PowerPoint chart last week:

“This next chart is the most risky one I have in the pack. I hesitate showing you, particularly given the most recent conversations. But, I think, rather than just looking at a moment in time, there is a value in extrapolating. And all sorts of health warnings around this, you know, you’ve got government economists, you’ve got analysts in the stock market, you know, you can’t ever predict these things correctly. But, just taking the trends of the last three years and of the last year and running them forward – and life won’t be that simple but – just to understand from a mathematical calculation, where would that take you? Well, if we took the three-year compound growth rate, of the last three years, it would run us through to achieving 50% by the end of 2015, if we take the three-year curve. If we took the one-year curve that we’ve seen in 2010, it would take us to the end of 2014. To get to the end of 2013, which was an aspiration of Digital Britain, would require the compound growth rate to rise to 26%. So it needs to take a step change. You could put an argument forward that there are step changes coming, in content, in coverage, in cars, in communications and in consumer electronics. But I think it would be a brave man, or a brave woman, to say that, you know, you are definitely going to hit that grey line, and I wouldn’t say that. What I would say is that, on current trends over the last three or four years, we are likely to hit 50%, you know, in the next five years, I would say.”

So, February 2011 plus five years equals 2016. Well, this does not match the forecast in the ‘real world’ graph above of 50% being attained by year-end 2018. But neither does it match the 2014 date in today’s Digital Radio UK update.

DAB and realism and numbers seem to mix as well as oil and water and … er, more oil.

“Quite where the maths comes from to deliver 2014 is beyond me!” one senior radio executive said to me today. “Why do they put this out when it will surely mean another stick to beat them when it doesn’t happen?”

[ENDNOTE: * = there is no statistical evidence from historical data to demonstrate that the automated Microsoft Excel trendline is anything other than straight line.]