A large part of the problem is the coalition government’s swingeing cuts to its marketing budget since May 2010, which have afflicted commercial radio advertising much more significantly than other media [see my blog]. Additionally, and very worryingly, in Q1 2011, revenues from local advertisers fell to their lowest level for a decade, even at a time when local radio might be thought to be making client gains from the decimation of the local newspaper industry.

As has been suggested here previously [see my blog], the strategy of the largest commercial radio owner, Global Radio, to transform its local stations into ‘national’ brands would seem to be a recipe for disaster at a time when:
• the national advertising market for radio is shrinking so rapidly (down 34% in real terms between 2004 and 2010)
• the BBC continues to dominate the national radio marketplace with exceptionally well-funded, ubiquitous brands [see my blog]
• Ofcom’s market research points to overwhelming demand from consumers for more local radio rather than more national radio [see chapter 4(d)]
• many local commercial radio offices have been closed just as local newspapers have closed in many local markets. 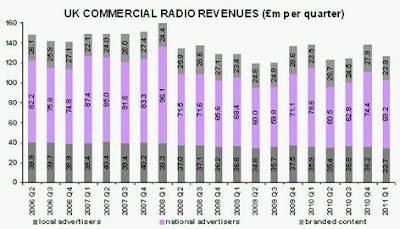 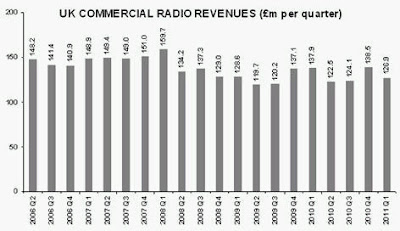 Although the quarter-on-quarter trend during the last three years appears to be relatively flat, once the data is viewed in the longer term, it is apparent that the commercial radio sector has been unable to grow its revenues back to the peak achieved in 2004. Adjusted for inflation, the ‘real’ peak occurred in 2000 and, by 2010, commercial radio total revenues had fallen by 33%. 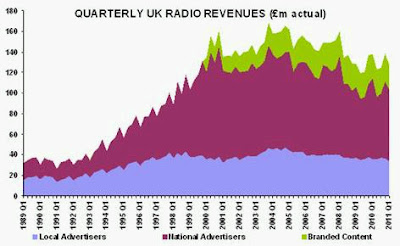 Following the impact of the ‘credit crunch,’ the subsequent blow to the sector caused by the government’s slashed expenditure on commercial radio advertising from its Central Office of Information [COI] has been catastrophic. COI spend on radio in the twelve months to March 2011 was down 80% year-on-year. In the year to March 2010, the COI had been the radio sector’s biggest advertiser by a factor of eight but, only one year later, it had been diminished to almost par with the second biggest radio spender, Autoglass. 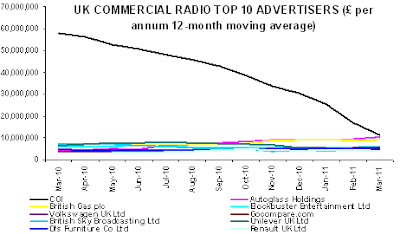 In June 2011, the government confirmed that the COI will be axed altogether, offering no respite to the commercial radio sector. According to The Guardian:
“Instead the government intends to run advertising and marketing activity out of the Cabinet Office, hiring about 20 extra staff to complement existing communications teams.”

With local advertising revenues having hit a decade-low in Q1 2011, and national revenues having fallen 34% in real terms between 2004 and 2010, surely it should be time for commercial radio to ask itself:
• is the current local-station-turned-national-network policy the appropriate strategy for the current advertising market?
• is the current local-station-turned-national-network policy the appropriate strategy to satisfy radio listeners?
• how much longer can the ‘slash and burn’ strategy (as pursued by GWR, then by GCap, now by Global Radio) be applied to the commercial local radio industry before there is simply nothing left to cut?
• how much more shareholder value can be destroyed in commercial radio before revenues fall faster than costs can be cut?

A question I was asked by one senior radio executive last week was: how will all this commercial radio ‘slash and burn’ end? I wish I knew. Of one thing I am certain: it must eventually end in tears once the net book values of dozens of commercial radio licences have to be written down by millions of pounds in the accounts of their owners.

This process has already started tentatively:
• Global Radio valued its licences at £333m on 31 March 2010, after having swallowed a £54m ‘impairment’ write-down in 2008/9
• in 2009/10, the Guardian Media Group suffered an ‘impairment’ of its radio licences by £64m and now values them at £68m
• Times of India looks likely to have to take as little as £20m for Absolute Radio, a national station it had acquired for £53m only three years ago.
We have to anticipate more write-downs like these.

At some point, even millionaires must not enjoy watching as their radio assets are reduced to dust by shrinking audiences/revenues. But what can be done when those same owners have already starved the goose that had once laid the golden local commercial radio egg?

[Endnote: Historical data from some previous quarters have been revised marginally at source]