In February 2011, some hysterical reports appeared concerning the White Paper published by the government in Norway on DAB radio. Some of these would have had us believe that Norway had made a definite commitment to switch off all FM radio in 2017. This was not true [as documented by diymedia and Media Network]. In fact, the government had set out several criteria that will have to be met before digital switchover can be sanctioned. The Norwegian criteria are similar to those adopted in the UK which, as commented here previously, are unlikely ever to be fulfilled, making switchover an ‘unreality.’ 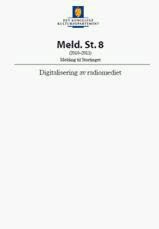 To make the situation perfectly clear, in the words of Norway’s media regulator:

“The following three conditions are absolute and must be fulfilled regardless of when switch-off takes place:

1. Digital coverage for the NRK’s radio services correspond to that of NRK P1 on FM
2. The multiplex that carries commercial national services (Riksblokka) must cover at least 90 per cent of the population
3. The digital radio offer must represent added value to the listeners

The above three conditions, as well as the two following conditions, must be fulfilled by 1 January 2015 for the switch-off to take place in January 2017:

4. Affordable and technically satisfactory solutions for in-car radio reception must be available
5. At least 50 per cent of daily radio-listeners employ digital platforms, exclusively or in combination with FM-radio

Provided the absolute criteria (1-3) are fulfilled in 2015, switch-off may nevertheless take place in 2019, even if criteria 4 and 5 are not fulfilled.”

Furthermore, far from FM being switched off completely, the regulator said:

The milestones anticipated by the government are:

“2011: The Ministry of Culture decides on the possible prolongation of commercial radio-licenses in the FM-network until 2017 (or 2019).

2013: The Ministry of Culture determines:
· Whether the coverage obligation for NRK radio-services shall be attached to the DAB-multiplex alone, or whether it may be fulfilled by employing other technologies in addition to DAB
· What is to be understood by the criterion ‘affordable and technically satisfactory solutions for in-car reception.’

2015: The Ministry of Culture decides whether the following conditions are met:
· The digital coverage of NRK-radio corresponds to that of NRK P1 in FM
· The population coverage of the national, commercial multiplex >90 per cent
· The Digital radio-offer represents added value to the public
· Availability of affordable and technically satisfactory in-car solutions
· Usage of digital platforms >50 % of daily radio-listeners. 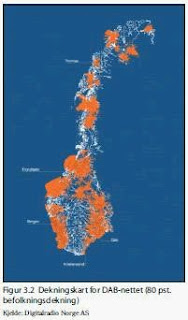 “The closure of FM radio worries the Progress Party, it worries IKT Norway and it worries consumers. To close FM radio, we need to scrap 15 to 20 million radio receivers, including even DAB radios that are not of the most modern type [DAB rather than DAB+]. This will have major consequences for consumers and for the environment.”

Thomsen asked the Minister of Culture: “What will the closure of FM radio cost the country? We know that it will cost consumers billions of krone, but what will it cost the state and society?”

The Minister rejected categorically the notion that consumers would have to pay one billion krone, or that 15 to 20 million radios would have to be scrapped. She responded:

“It is very clear in the White Paper that the digitalisation of radio will be consumer focused. It is typical of the Progress Party to spread fear about something that has already been addressed. These figures are not correct. There are, according to numbers that I have been quoted, 3.5 to 7 million radio receivers in Norway. These devices will not be thrown out. People can buy adapters that will provide access to digital radio.”

“It is the simulcasting [on FM and DAB] that is the most expensive. When we published the White Paper on the digitalisation of radio, P4 responded immediately that it wanted to launch more stations. There will be more competition and more channels. It went very well when we introduced digital television. It is going to go just as well with radio.”

Ib Thomsen was unsatisfied with the Minister’s response. He replied:

“The Progress Party is not the only one that is worried. IKT Norway and the rest of the world is concerned too. Adapters will cost consumers 1,200 krone. It is a pity that the Minister is not taking into account that Norway is locking itself into a technology that has already been scrapped by the European Union.”

“The European Commissioner has stated that radio must be at the forefront of the digital revolution and has highlighted DAB. It is not true that no other countries are digitising radio. There is no discussion in Europe as to whether to introduce DAB or not, only discussion about the date for digitalisation. Neither is it correct to say that adapters will cost 1,000 krone. Prices will go down.”

To date, sales figures for DAB radios in Norway have been even less impressive than in the UK. In 2010, only 81,000 DAB radios were sold out of a total of 833,000 radio receivers. The cumulative total of DAB receivers sold is 336,000, although these are DAB rather than DAB+ and will have to be replaced if Norway changes to the latter system.

IKT Norway has long argued that DAB radio is not appropriate as the digital platform to replace FM radio. After the White Paper was published, its secretary general, Per Morten Hoff, commented:

“Norway becomes the first country in the world to decide to shut down its FM radio networks. This is a bold decision at a time when technological developments are more uncertain than ever. Closing FM radio gives you no route back. NRK has spent several hundred million krone building its DAB network, ‘a killer’, and its owner, the Norwegian state, and the Culture Minister have concluded that there is no going back. The market has said so far that it is not adopting DAB, so forcing them has been the only way forward.”

There would appear to be a number of reasons why DAB is being pursued so doggedly in Norway:
· Norway was one of the first countries to invest in a DAB radio transmission system in 1995
· Jørn Jensen, since 2009 the president of World DMB (the organisation lobbying for the replacement of FM with DAB), is the chief adviser to NRK on platform distribution
· NRK, the state broadcaster, signed DAB transmission contracts with Norkring that do not expire until 2020, so the government cannot pull the plug on DAB without exposing an embarrassing waste of public funds

Some of the issues facing the successful implementation of DAB in Norway would appear to be:
· Only 80 DAB transmitters are currently in service, although at least 650 will be necessary (TV in VHF Band III uses 2,635 transmitters and transponders)
· Achievement of 99.5% DAB coverage (to match FM coverage) will prove very expensive, and Norkring has only guaranteed 90% in its current transmission contract with NRK. The government will be forced to fund the difference
· The government White Paper noted that current FM coverage is 99.5%, although NRK FM coverage is 99.95%, a more expensive penetration for DAB transmission to match
· The high costs of simulcasting about which Arild Hellgren, former NRK director of technology, commented: “Compared to what happened when we digitised TV, we will have a very long period of parallel distribution on FM and DAB. It is very expensive”
· The two national commercial stations will be granted automatic licence renewals ONLY IF they support the DAB platform and pay for DAB coverage up to 90%
· Local stations’ transfer to the DAB platform will be determined by the government in 2015 in a ‘Big Brother’-style elimination contest

So who was the bright spark in the Ministry of Culture who decided to headline its press release: “FM switch-off in 2017 – the radio medium will be digital”?

By 2017, that person could have a large quantity of egg on their face.

[thanks to Bjarne Boen, Darryl Pomicter + others]