The RAJAR radio audience data for Q4 2008 were published on 29 January 2009. The day’s news headlines heralded the success of the digital radio platform. “Radio surges in popularity thanks to digital”, said The Independent; “Digital Enjoys RAJAR Boost”, said Radio Today; Music Week said: “the latest Rajars survey revealed that digital broadcasting is growing apace in the UK……”; and The Times said: “Digital audio broadcasting (DAB) is clearer, truer, purer. Every year its coverage widens. Every year more stations are added to its almost infinite capacity……FM has had its day.”

The audience must have a strange way of showing their appreciation for digital radio. In Q4 2008, listening to digital-only radio stations fell precipitously, both for the BBC and for commercial radio. 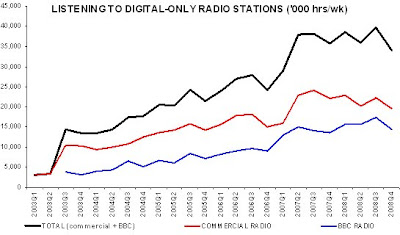 This graph illustrates just how sharp was the decline in listening to digital-only radio stations during Q4 2008:

For the commercial radio sector, 2008 had been the year it finally faced up to the realisation that its digital-only radio stations were not going to break even in the short- or medium-term. This resulted in the closure of digital stations Mojo Radio, Yarr Radio, TheJazz, Capital Life, Oneword Radio, Virgin Radio Groove and Core during the year. Inevitably, with fewer offerings for consumers, listening to commercial digital-only stations was likely to be impacted. 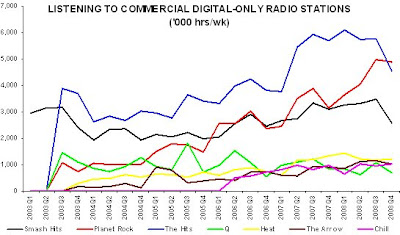 The surprise result from Q4 2008 RAJAR data is that the sector’s remaining digital radio stations have suffered terrible declines. The graph above tracks the largest digital stations, of which only Planet Rock achieves a relatively stable performance (and now becomes the sector’s most listened to digital station). Otherwise:

Although, as the graph shows, the data has always been ‘bumpy’, the simultaneous decline of listening to all these Bauer-owned stations is a very worrying trend. Bauer is now left carrying the torch for digital commercial radio in the UK, following rival GCap Media/Global Radio’s decision last year to close/divest almost all of its digital stations (only The Arrow and Chill remain).

Planet Rock’s owner Malcolm Bluemel said this month that his aim is to make the station profitable by Christmas. The question is: if the UK’s most listened to digital commercial radio station is still struggling to break even, what hope is there for the rest of the pack?

It is all very well for Lord Carter’s Digital Britain Interim Report to “expect the radio industry to strengthen its consumer proposition [..] in terms of new and innovative content….” but, at present, the economics of digital-only radio stations simply do not add up. Not a single digital-only radio station has yet reached break even. How can realistic business plans for new commercial digital services be forged, when nine-year old Planet Rock has yet to make an operating profit, let alone recoup its accumulated losses?

If the commercial sector’s digital radio audiences offer cause for concern, the BBC’s comparable audiences are downright scary. With the exception of BBC7 (which remains the UK’s most listened to digital radio station), audiences for the BBC digital services are down substantially. 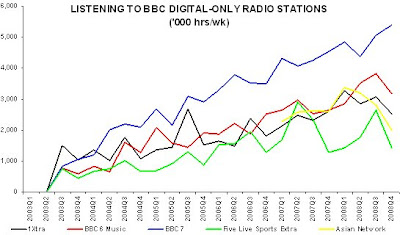 BBC Five Live Sports Extra can be excused because it is a part-time station whose listening fluctuates with the sporting seasons, but elsewhere:

Despite the BBC having launched its digital radio stations in 2002 and then having promoted them extensively on TV, radio and online, their growth of listening remains stubbornly linear. One quarter’s RAJAR results alone do not a trend make, but the worry must be that the volume of listening to these stations might have already plateau-ed. In other words, if everyone who would be interested in listening to, say 1Xtra, is already listening to the station after seven years of promotion, then there would be little headroom for further audience growth.

Planet Rock’s Malcolm Bluemel pointed out: “[The BBC] spend £7m a year on 6 Music and another £1m on marketing it. Our annual budget is £1m, plus £20,000 on marketing.” At some point in time, and sooner rather than later if the audiences of the BBC digital stations show further signs of having plateau-ed, the BBC Trust is likely to want to conduct a cost/benefit analysis to determine if its digital radio stations really offer the Licence Fee payer value for money. In Q4 2008, the peak half-hour audience of Asian Network was 29,000 adults, of 1Xtra 36,000 adults, of BBC7 68,000 adults, and of 6 Music 69,000 adults. The 2008 service budgets for these stations were £8.7m, £7.2m, £5.4m and £6.0m respectively.

Between the BBC and commercial radio, huge sums of money have been spent over the last decade on launching and running digital radio stations that have attracted relatively small audiences. In the meantime, new technologies (on-demand, downloads) have overtaken us. If the radio industry’s response to Lord Carter’s Digital Britain is simply to launch more new digital stations that will inevitably lose more money, the industry has missed the point.

We now live in an on-demand world where ‘content’, not ‘radio stations’, is what consumers increasingly demand. Perhaps we do not need more new radio stations, or even existing local commercial radio brands rolled out nationally as faux new digital brands. What we need is the ability for consumers to access engaging radio content, when, where and how they want it. The days of listener loyalty to one radio station are fading fast.

In these financially hard pressed times, it seems ridiculous to be creating more expensive, new broadcast ‘stations’, each of which are unlikely to attract significant amounts of listening, but each of which will use a huge amount of scarce radio spectrum. Today, I wanted to listen to the Northern Soul show from BBC Radio Stoke, followed by David Rodigan’s reggae show on Kiss, followed by WMPR’s breakfast show. What I need is not a new digital radio brand, but a ‘pick’n’mix’ menu system where I can easily create my own personal radio station – a bit like a Pandora or Last.fm, but populated with radio programmes rather than just songs.

This will be the future………. and it will probably arrive as soon as the BBC has finished inventing it. Broadcast radio will continue to be an important medium for mass audience shows like Today, Terry Wogan and sports coverage. But, for any content that is remotely specialist, on-demand delivery will have to be the way forward, the result of economic necessity. In 2009, the idea of creating more radio stations, more radio brands, more costly 24-hour broadcast operations has to be wholly redundant. This is an issue that the BBC Trust will have to face up to much earlier than the commercial radio sector. Next quarter’s RAJAR could be that touchpaper.

In the meantime, the future of digital-only radio stations hangs in the balance. As Bauer Radio’s Mark Story had told Media Week: “It’s going to be a long road for digital radio”. Then, twelve days after the latest RAJAR results were released, Mark announced he was leaving Bauer after eleven years’ service. He said: “To be brutally honest, it’s not the most fantastic time to be in radio…..”