The Digital Economy Bill was published by the government last Friday. Press headlines about the radio provisions in the Bill included:

Below is a selection of initial reactions from stakeholders in the commercial radio sector:

Scott Taunton, Managing Director, UTV Media, said: “What radio really needs is some meaningful deregulation and licensing reform to enable it to thrive and adapt in the multimedia age. The Digital Economy Bill shows that government is out of tune with listeners, who are delighted with the broad choice and accessibility that radio already offers.”

William Rogers, Chief Executive, UKRD and The Local Radio Company, said: “Where is the fairness in a proposal to permit 100 per cent of the BBC’s local radio stations a digital future and deny over 100 local commercial radio stations the same opportunities? The Bill is fundamentally unfair and dishonest and I hope the Peers give it the going over it thoroughly deserves.” He added: “We need to inject some honesty and fairness into this debate. What is honest about suggesting to millions of listeners in the country that they will be delivered a wonderful digital listening future when the results will be to deny them the opportunity to listen to their favourite local radio station?”

Andrew Harrison, Chief Executive of RadioCentre, said: “There was no permanently set date in the Digital Britain report – 2015 was just a target. This is a clever and enabling piece of legislation as it allows the Secretary of State to set a date for switchover without having to create more legislation. Based on annual progress reports from Ofcom and BBC, they can set a date when the circumstances are rights for which at least two years notice must be given”.

Travis Baxter, Managing Director of radio at Bauer, said: “There is always a difference between setting out objectives and actually having government’s support. This piece of legislation has created a mechanism to create a date when consumer demand for digital radio is great enough.”

Two days before the Bill was published, a spokesperson for Digital Radio UK said: “Whilst the target date of 2015 may be ambitious, the consumer-led criteria are achievable for operators who are committed to a digital future. Without an ambitious target date, the alternative is to condemn the industry to an indefinite period of dual transmission, a financial burden that commercial radio cannot continue to bear and that represents a poor use of public funds for the BBC.”

A few weeks earlier, a spokeswoman for Digital Radio UK had said: “The Digital Britain report does not set annual targets and we do not have a specific target to meet in terms of total share beyond the two criteria for upgrade. It has only been a matter of months since the publication of the Digital Britain report and all stakeholders in digital radio have galvanised their activity.”

“There are numerous ways that a graph could plot a path to growth and we anticipate that take-up will accelerate as a result of the excellent foundations we are currently building. There is clearly some way to go but the industry is confident that with the formation of Digital Radio UK, the provisions in the Digital Economy Bill and the collective will of all stakeholders, we will successfully deliver the benefits of digital radio upgrade to listeners.” 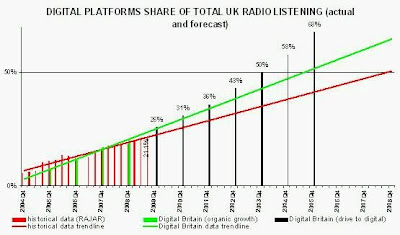 Q: Everybody is really worried about this and can’t quite see the point of why we are pushing ahead [with digital switchover], even if it is a target, by 2015.

AH: “Well, I think that why there is a need is fairly straightforward. The truth is that Britain loves its radio services. About 40 million of us tune into the radio every week. But the way we receive our news and entertainment is changing all around us in a digital world. It’s changing in television, it’s changing for films and music and newspapers. So it’s very important that radio, which is at the heart of British daily life, has its own chance to look forward and face the future in a digital sense, rather than being trapped in a sort of analogue environment while the rest of the entertainment world goes digital.”

Q: But we love to hear our radio in decent quality and the problem with digital [DAB] at the moment is it doesn’t work very well in cars, indoors or in rural Britain.

AH: “That’s absolutely right. That’s why we need some time as an industry to roll up our sleeves and improve the coverage for digital and improve the listener experience so that, when we actually get to the stage of contemplating actually switching over services, it will be a service for listeners with more choice and better functionality, but with the transmission quality that would be absolutely imperative.”

Q: And you can guarantee that you can solve the problems that currently exist by 2015?

AH: “Well, the Bill doesn’t set out 2015 as a date. What the Bill sets out is the two key criteria which will be important to set a switchover date. That is that consumers or listeners can hear the service, so that they can get a digital transmission where they can currently get an FM transmission, and that they are actually listening to those services, so one of the criteria will be that over 50% of listening is via digital. Once those two thresholds have been crossed, then I think we’ll be very confident that we can deliver the services fit for a digital age.”

Q: When do you think that those thresholds can be crossed?

AH: “Well, our target is to try to hit the thresholds by the end of 2013 to then start the two-year window to switchover. It remains to be seen whether the industry collectively can work together – that’s the commercial sector, the BBC and Arqiva, our transmission provider – very hard across the next four years to get on with the job.”