It appears there may be a factual error in the Digital Britain Interim Report. I assume it was an accidental mistake in drafting. Obviously, a government document would not deliberately misrepresent the facts.

The Interim Report states on page 32:
“Dedicated analogue radio sets are no longer part of the retail mainstream: analogue continues to be used in bundled products (e.g. radio alarms). But, in dedicated radio, DAB has become the medium of consumer choice.”

There are two distinct assertions here:

I have sat through several Powerpoint presentations at radio conferences, both in the UK and overseas, which claimed that analogue radio receivers (AM/FM) have almost disappeared from retail outlets in the UK. The facts tell a very different story. 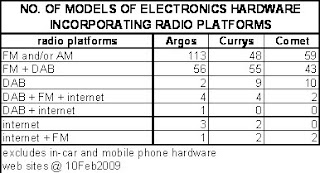 Interestingly, when DAB radio receivers were first introduced, most models were single-platform (such as the ‘Pure Evoke 1’). This has changed significantly, so that the vast majority of DAB radio receivers presently on sale are dual-platform (mostly DAB + FM). This change provides a significant ‘safety net’ at all levels of the value chain, should the DAB platform fail to develop into a mass medium for radio broadcasting.

For consumers, the incorporation of the FM platform into DAB radios should encourage hardware purchase, removing the perceived risk of platform failure (viz ITV Digital). However, the continued availability of the FM platform in ‘DAB radios’ is likely to impact consumer usage of the DAB platform. If a consumer buys a ‘DAB radio’, but they continue to use the FM platform incorporated within the hardware for part of their radio listening, they are contributing to the DAB platform’s struggle to gain sufficient traction that FM broadcasting can ever be switched off.

Additionally, one wonders how many RAJAR respondents use their ‘DAB radio’ to listen to stations on the incorporated FM platform, but report this listening in their diaries incorrectly as ‘digital’ rather than ‘analogue’. Surely, if I buy a ‘digital radio’ which clearly says ‘digital radio’ on its facia, then all the content I listen to using that radio must be ‘digital radio’? No wonder the marketplace is confused.

Examining the other side of the retail marketplace, in terms of consumer purchases of DAB radios, an appendix attached to the Digital Britain Interim Report demonstrates (page 41) clearly that the vast majority of radios purchased in the UK are not DAB, according to data collected by GfK for the Digital Radio Development Bureau. The graph below updates this same data: 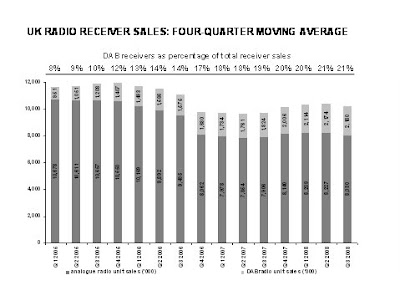 The data show that 79% of radio receivers purchased in the UK during the last twelve months were analogue and did not incorporate the DAB platform. The vast majority of radios sold in the UK continue to be analogue, not DAB, which is why, as demonstrated above, electronics retailers continue to stock so much hardware incorporating analogue radio. In some types of hardware, notably personal media players, the market is still almost entirely dominated by analogue radio (in those models that include radio).

In conclusion, the assertion made in the Digital Britain document that “dedicated analogue radio sets are no longer part of the retail mainstream” seems incorrect.

ASSERTION 2
“DAB has become the medium of consumer choice”

The latest RAJAR radio audience data from Q4 2008 demonstrate that the overwhelming majority of radio listening continues to be consumed via the analogue platform, not via DAB. 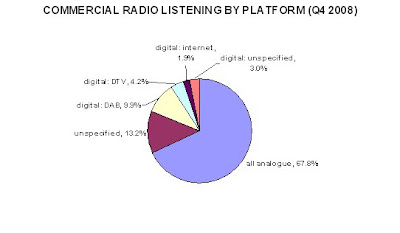 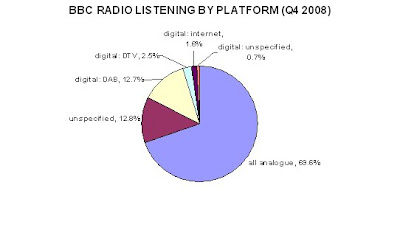 For BBC radio, 13% of hours listened are via the DAB platform, whereas 70% of hours are consumed via analogue.

In conclusion, the assertion made in some press coverage that “DAB has become the medium of consumer choice” is incorrect.

Analogue radio is alive and well in the UK because consumers continue to demand and purchase electronic goods that incorporate the analogue radio platform; and because radio listeners are consuming content predominantly delivered via the analogue platform. These are the facts.

3 thoughts on “DAB: the medium of consumer choice?”