A newsletter arrived in my in-box today from Digital Radio UK, the new organisation charged with making DAB radio a success. It told me some startling news:

“By the end of 2009, when buying a radio, more than three quarters of people chose a digital one.”

And, just in case I did not believe this fact, immediately beneath, it told me the same thing again:

“New sales figures reveal that, when buying a radio, more than 75% of people choose a digital one.”

I did not believe it. All the previous data from the radio industry had shown that DAB radios are around 22% of total radio sales, as demonstrated in the graph below. 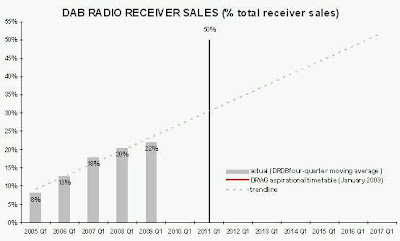 A year ago, the government’s Digital Radio Working Group had set an ‘aspirational’ target for DAB radios to be 50% of total radios sold by the beginning of 2011. As this graph clearly shows, the odds of successfully coming anywhere close to that target are zero.

Maybe something revolutionary had happened in the consumer market for the proportion of DAB radios sold to have suddenly surged from 22% in Q1 of 2009 to 75% by year-end. It was extremely puzzling.

Then I read an extraordinary letter that Ford Ennals, chief executive of Digital Radio UK, had written to the House of Lords Select Committee on Communications on 15 February 2010. It said in part:

“I thought […] that it might be useful if I wrote with the very latest radio sales data. Encouragingly, it shows that, during 2009, consumers increasingly chose digital sets over analogue ones.

I thought it clearest to present the data in a simple table, which is attached, but it may be useful if I explain a couple of the terms used. Where the data refers to ‘kitchen radios’ it means the kind of sets that you and I would call ‘a radio’ i.e. a set whose sole function is to listen to the radio.

Where it refers to ‘all radios’, these figures include those pieces of electrical equipment which happen to have a radio chip in them (e.g. a hi-fi where the main reason for purchase may be to listen to CDs or an MP3 player where listening to downloaded music is the primary function).

Aha! Now I think I understand. The only way in which it is possible to contrive that more than three quarters of radios sold are digital radios is to arbitrarily create a completely new definition of ‘radio’. In this brave new world, only a ‘kitchen radio’ will now be called a ‘radio’. (The truth is: 76% of people who purchased a kitchen radio during December 2009 bought a digital radio, though the proportion for the whole of 2009 was 63%.) Every other type of radio is no longer defined as a radio. This new definition of ‘radio’ would completely exclude:
• Micro systems
• Clock radios
• Tuner separates
• Handhelds
• Boomboxes
• In-car radios
• Audiovisual systems
• Home cinemas
• Docking stations
• Dect phones [?]
• Mobile phones
• LCD TVs
• Record players

This seems like a long list of products which, if they also happen to include a radio, will no longer be defined as having a ‘radio’. How can a ‘clock radio’ not be a radio? How can a ‘tuner’ not be a radio? I know this long list to be a comprehensive definition of ‘radio’ because it was the very definition of ‘radio’ used by the Digital Radio Development Bureau, the forerunner to Digital Radio UK, in its published data. Of course, that was last year. In 2010, ‘radio’ seems now to have a whole new definition.

What can I say? However desperate you might be to try and make DAB radio a success, how is it justifiable to deliberately mis-state data so outrageously in print? And to Parliament?

2 thoughts on “DAB radio receiver sales: never let facts get in the way of a big number”