Is it me, or is it becoming increasingly difficult to reconcile the numbers in the latest RAJAR radio ratings data with the write-ups of those numbers in the trade and consumer press?

“Commercial radio’s audience …. grew from 31.2m to 31.5m listeners a week”, said The Telegraph and, using precisely the same wording, said the BBC.

“Commercial radio had an audience of 31.5m adults, increasing its reach and share of the audience compared to the previous year,” said The Independent.

These reports appear contradictory and inconsistent. This is partly due to poor reporting, but it also because there are a number of different metrics used to measure the audience for radio (and thus for commercial radio). These include: 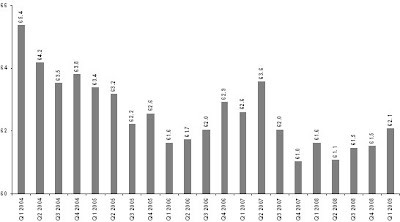 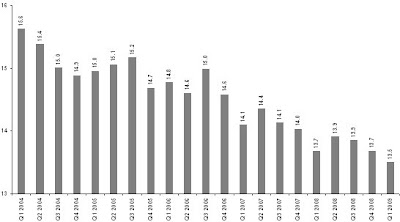 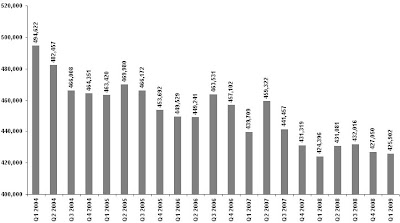 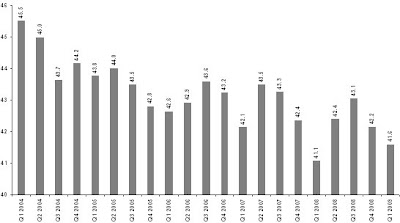 As can be seen from the above graphs, the numbers naturally oscillate across time, regardless of their long-term trends. This makes it easy each quarter to pick out at least one measure that shows a gain, either quarter-on-quarter or year-on-year or both, and highlight that number alone in a

press release. There is always some number, whatever it is, that is going to be ‘up’ rather than ‘down’. Without placing that solitary ‘up’ number in any context, many journalists simply jump upon the press release and proclaim that everything is ‘up’. And so it was this quarter.

It would be great to be able to report that commercial radio in the UK had turned the corner and was bouncing back, attracting more listeners for longer periods of time, and trouncing the BBC. Unfortunately, the facts say otherwise. The only thing that some of these ‘up’ headlines in the press prove is the sector’s ability to spin a good yarn. However, an industry that believes its own PR is an industry in trouble.

Complacency is a large part of the problem that has led the commercial radio industry to where it is today – not a particularly happy place. If all this fake positivity around the RAJAR results simply encourages further complacency in commercial radio, it could hasten the death of the industry.

Everybody likes to hear good news. Nobody wants to be a bad news bear. But for an industry to be taken seriously, it needs to be imparting factual and accurate statements about the state of its health.

To its credit, only The Independent had the temerity to ask: “Why are radio audiences rising, and how come the industry is in crisis?”

One thought on “Commercial radio and RAJAR: the truth is out there (somewhere)”