“More than three-quarters of the UK’s top 100 advertisers increased their adspend in 2010, defying predictions that the year would mark a steep decline in marketing budgets. By channel, the biggest year-on-year increase was in TV advertising, with a 17% rise, according to Nielsen; print, outdoor and cinema spend also rose.”

So, good news for radio too? Marketing continued: “The only medium in which spending fell was radio, falling 6% on 2009 levels.” Oh dear.

Why was radio so badly hit in 2010? Partly because of commercial radio’s greater dependency than other media on public expenditure which, as Marketing explained, was cut drastically in 2010:

“The government’s commitment to slashing public-sector spending was reflected in the 50% year-on-year decline in the COI’s [Central Office of Information] adspend to £105.4m.”

And partly because the volume of commercial radio listening has been in decline for the last decade, and sector revenues are a product of listening. 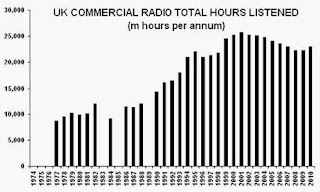 As for the other issue of slashed public expenditure on commercial radio, although 2010’s loss of £24m seemed bad [see my blog], 2011 could prove to be worse. On Friday, the Cabinet Office recommended the scrapping of the 60-year old Central Office of Information:

“As part of the changes, the COI will be replaced with a new body, the Government Communications Centre, with a wider remit and responsibility for keeping a tight reign on advertising and marketing spend. … The report does not say how much the government might cut from its £1bn annual communications bill, or how much of the £540m spent on everything from TV, radio and posters to sponsorship might be reduced.”

This would prove a further financial blow for commercial radio, since COI expenditure on radio of £30m in 2010 still contributed as much as 11% to the sector’s national advertising revenues, even after having been slashed by the coalition government.

Although Marketing’s (Nielsen) data reported that radio’s national revenues fell by 6% in 2010, the commercial radio sector’s own numbers showed a 6% increase. This discrepancy is puzzling. Nevertheless, analysis of the industry’s dataset tells us: 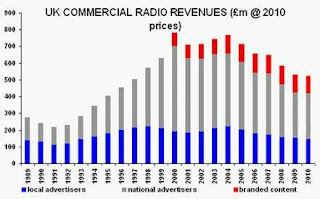 This apparent collapse in local advertising revenues would appear to mask a dichotomy that is taking place in the radio sales market. For those stations in small groups or independently owned that rely almost entirely on local revenues, the market for local advertising has already rebounded from the recession. The closure of many local newspapers, the cuts to local council freesheets and the closure of many local radio station offices owned by large radio groups have left these genuinely local stations in an opportune position to hoover up more local advertisers.

On the other hand, local radio stations that have been transformed recently by Global Radio into ‘national brands’ (Heart, Capital) seem to be abandoning their interest in local advertising markets. If I owned a local business in Eastbourne, I would like to know how effective an advertisement would be on the local Heart FM station in my immediate area of Eastbourne & Hastings. This is no longer possible because Global Radio has done away with RAJAR audience data for many local markets. The smallest market that RAJAR can tell me about now is “Sussex” comprising 1.3m adults – much too big a coverage area for an advert for my one local shop in Eastbourne.

This new strategy seems inconsistent with the Heart FM licence for Eastbourne & Hastings which Ofcom insists is “A LOCALLY ORIENTED CONTEMPORARY AND CHART MUSIC AND INFORMATION STATION…” So, please will Ofcom explain how Heart FM can be a “locally orientated” station if, as a potential advertiser in Eastbourne, I can no longer determine how many people would hear an advertisement broadcast on the station?

RAJAR explained the changes to its data: “Campaigns transferred from Q3 2010 to Q4 2010 will contain the old station definitions and they will be visible Q4, however the data will not be accurate. Please re-plan the campaign using the new regional definitions available in Q4.” In plain English – audience data for local stations have been removed and merged into regional groupings from last quarter.

I am reminded of a meeting in 2007, just weeks before EMAP was sold, with its chief executive when I asked him if he felt there was anything that the group’s radio division should have done differently. Local advertisers, he told me. We neglected local advertisers in pursuit of the larger amounts we could earn from potential national advertisers. But we turned our backs on previously loyal local advertisers who quickly lost interest in our stations without regular contact from our salespersons.

Here is a lesson to be learnt from the UK’s second largest commercial radio group. Don’t look your local cash cow in the mouth.