As soon as the coalition government came to power in May 2010, it implemented Conservative Party policy to make substantial cutbacks to the amount of public money spent on government marketing campaigns. Commercial radio was hit the hardest because, more than any other medium, it had become increasingly dependent upon government expenditure on advertising airtime.

In 2010, before the general election, I had predicted [see my blog] that the impact of these cutbacks would prove “disastrous” for the commercial radio sector. I had calculated that a 50% cut in total public expenditure on commercial radio advertising would lose the sector £44m to £48m in revenues, equivalent to 9% of total sector revenues.

Interviewed by BBC Radio Four, I was asked if my scenario was not overstating the potential impact on commercial radio. I argued that it was not – the amount spent by the government’s Central Office of Information [COI] on commercial radio dwarfed all other radio advertisers by miles. By February 2010, government expenditure on radio commercials was greater than that of the second, third, fourth and fifth largest advertisers combined.

The Radio Advertising Bureau had put a brave face on the losses from its biggest advertiser. In June 2010, it said: “We are optimistic that radio’s strengths will be recognised as COI budgets come under ever greater scrutiny.” In September 2010, it said it was “working with a wide range of advertisers to bridge the gap” left by public expenditure cuts. 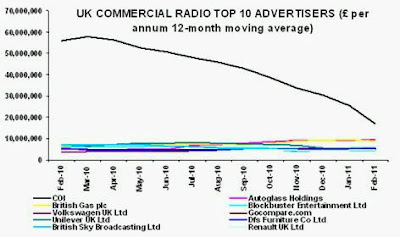 However, the latest data from Nielsen show that the impact upon commercial radio has been even greater than I had forecast. In the year to February 2011, COI expenditure on radio advertising was down 70% year-on-year, much greater than the 50% cut that had been anticipated from previous Conservative Party pronouncements. In total, commercial radio lost £44m per annum from all public expenditure on radio, compared to the previous year.

The worse news was that, as the graph above shows, the fall in COI expenditure has become steeper in recent months. As a result, the impact on the sector in 2011 is likely to be just as severe as it was in 2010. The hard fact is that this is not a temporary cyclical loss for commercial radio – these revenues will not rebound for as long as the coalition government remains in power.

The graph shows clearly that no individual or group of advertisers have been able to substitute entirely for the losses caused by government cutbacks, although some gains were made from clients in 2010 [see my blog]. No commercial advertiser spends more than £10m per annum on radio, whereas the COI had spent £58m in the year to March 2010 (but was down to £17m by February 2011). This is simply too big a gap to be filled by a few individual commercial advertisers.

Media Week reported recently that “the more optimistic media owners are hoping the COI’s former spend [on radio] can be clawed back by year’s end.” It is hard to see how that can be realistically achieved, given the scale of the £44m per annum loss from public sources to date, particularly in the face of declining consumer disposable incomes.

In an attempt to offer a positive outlook, Media Week suggested: “But the situation is set to improve. From April [2011] onwards, there will no longer be any comparable year-on-year COI spend left in the system, as purdah [sic] kicked in 2010.”

Perhaps what Media Week was trying to say was that COI expenditure will level off this year once the savage cuts have been in situ for more than a year. Yes, inevitably, but that does not in any way help an industry that has just witnessed £44m per annum of revenues disappear into thin air. Remember that total commercial radio revenues in 2010 were only £523m, already down from £641m in 2004. Now a further huge 8% chunk of income has gone.

Another commentator recently noted optimistically: “The [radio] medium took £523 million in revenue in 2010, up 3.3% year-on-year, and 2011 looks like another positive year of growth, not the inevitable management of decline forecast by some.” 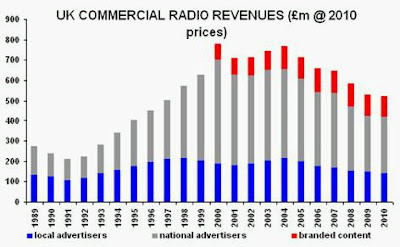 However, once inflation is taken into account, 2010 commercial radio revenues fell in real terms [see my blog]. Far from a decline being “forecast by some,” the industry’s own data demonstrate that decline has been occurring since 2004 in real terms, long before the recent cuts to government expenditure. Adjusted for inflation, commercial radio revenues in 2010 were lower than they had been in 1998.

This is not the time for spreading unfounded optimism based on ignorance of the facts. If anything, the impact of government cuts has proven to be more than “disastrous” and will necessitate even more restructuring of the commercial radio sector in the short term. This could include the closure of further unprofitable digital ventures and of sector support agencies whose subscriptions will begin to appear increasingly discretionary when the axe has to fall somewhere.